THE AFTER TIMES by Christine Potter (Guest Post, Excerpt & Giveaway) 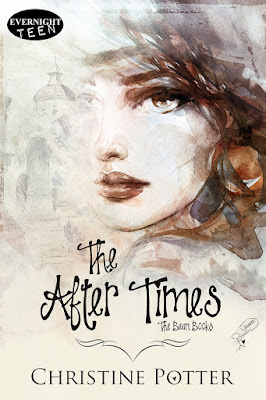 Say you’re Gracie Ingraham, nerdy but happy high school senior. But you’re also a time-traveler from 1962 who got a bit lost and has been living in the 2000’s since 2018. That would be plenty without it now being 2020. Covid has just shut down the world. Your pandemic pod? Your BFF Zoey—and your ex-boyfriend, Dylan.

Dylan still lives to spin weird vinyl LP’s with your sort-of, kind-of Dad, Amp. So your quarantine hobby is going to have to be Being Mature About Stuff.

But then your time traveling kicks into high gear again. And your long-lost brother and mom mix it up with a creepy, pyromaniacal force that is most likely demonic. How can love save the day when you can’t even go downtown without wearing a mask?

Why Time Travel? Why YA Fantasy?
I’m not the sort of person you’d accuse of having written a young adult fantasy series. I don’t have kids (seem to have forgotten to do that), my actual age is closer to Old Adult than Young Adult, and I never watched Game of Thrones. I’m not impressed with the Harry Potter movies (love the books, though). The other stuff I write is literary: poetry, mostly free verse.

I guess the tip-off is that I spent most of my life working with kids. It started at a daycare center in the 70’s and went up through the turn of the century in first a private and then a public high school. Along the way I did lots of other stuff—I was even a chef for a while—but I always came back to teaching, mostly teens, usually English or creative writing.

I love teenagers. I love their energy. I love their loyalty to friends, their courage, their big, honest moods. My last and longest teaching job was at a public school in a fairly conservative district: think wealthy suburbs, think kids being pressure-cooked in preparation for The Perfect College. It amazed me how much homework I was supposed to assign.

When my students wanted to waste time in class, they asked me if I’d been a hippie, and I told them the truth: oh, yeah. It’s kind of hard to hide that. I’ve still got the subversive gleam in my eye, and I never stopped wearing paisley and denim.

My own YA years were probably angstier than most. I was one of the pioneering bohos in my little Hudson River town, and my parents were locked in a miserably unhappy marriage. And there was the generational angst: the assassinations, the Vietnam War, graduating college into the teeth of a recession. But there was a sense that anything was possible. There were huge, long hours after school to hang out with a boyfriend or girlfriend or just sit beside that amazing river, gorgeous even in the worst of its pollution. And even though times were tough in the early 70’s, a twenty-one-year-old could actually afford an apartment and a junky car.

I couldn’t tell my students all that stuff in the five minutes before the bell rang. So I wrote these books.

They are time-travel, but my characters travel from the 70’s to the past—or in the last two books from 2018 and 2020 to the past. No time machines—the past just sort of grabs them and says, “Hey, look at this.”

I wanted to make a series that was its own world, so I’ve got characters that go straight through all the books. There’s a lot of music. And art. There are mean parents and really understanding parents and there are also out and out demons. I mean like devil-demons!

It turns out that certain people are born with the ability to zip into the past. They’ve always been around; it’s just kind of a secret they keep to themselves. Time travelers, or Travelers, as my series calls them, tend to find one another. And among their community, like any community, there are good guys and bad guys. There’s some violence, but not gobs of it. There are any number of love stories.

There’s a lot of goofiness. One thing I noticed about working with kids is how much they laugh. My plots tend to be all over the place. My books let me know where they want to go while I’m writing them. That frequently surprises even me.

Why? All that is why. Because these five books are the best gift I could come up with. And The After Times is their grand conclusion. You don’t need to read the other books first to understand it, by the way.

Let’s waste a little time together, okay? Yeah, I was a hippie, for real. And I want to tell you a story.

I pulled out a note and opened it up. The crease in it seemed sharp and fresh, as if it had just been folded that afternoon. It was on old-school yellow legal paper, torn from a pad, written in unfaded black ink—big letters.

Grace—I’m okay. I really am. Don’t believe everything you see. Mom’s okay, too. By the way,
Jesse is a major asshole. Gotta go— Jack.

“Zoey! Claire!” I folded the note back up, put it in my pocket, and ran downstairs.

“Whoa! Those look great on you!” Claire pushed herself up from her chair. “Turn around! Let’s see how they fit in the back.”

“Right. They fit really well.” I spun around. “But this was in them. From my brother!” I pulled out the note and waved it in the air.

I shouldn’t have been as shocked as I was when the paper in my hand burst into flames. I mean, we did have a theme going with that.

I ran to the sink and flung it in. I was about to blast it with water when it turned into a bright blue ball of light, silently exploded, and disappeared without a smudge of ash left behind. It didn’t even smell like smoke. Jack’s note was there—and then totally not there. It might as well have never existed. I leaned against the sink and felt dizzy.

Claire was beside me with a hand over her mouth.

“Holy crap, Grace.” Zoey looked down into the empty sink and then back at me.

“Yeah.” I don’t know why, but I turned on the water and washed my hands then. I’m not sure if I did the whole twenty second thing you’re supposed to. 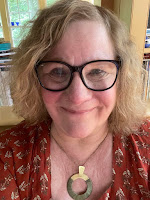 Christine Potter is a writer and poet who lives in a (for-real) haunted house in New York’s Hudson River Valley, not that far from Sleepy Hollow. She is the author of Evernight Teen’s Bean Books, a five book series that travels through time—and two generations of characters. Christine is has also been a teacher, a bell ringer in the towers of old churches, a DJ, and a singer of all kinds of music. Her poetry has appeared in literary magazines like Rattle and Kestrel, featured on ABC Radio News, and sold in gum ball machines. She lives with her organist husband Ken and two indulged kitties.
Places to find Christine Potter:
Website | Facebook Personal Page | Facebook Bean Books | Goodreads | Amazon Author Page
You can follow The After Times Blog Tour here.