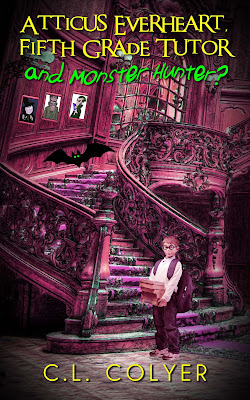 Nothing frightens Atticus Everheart more than monsters, thanks to his older brothers, who often threaten to feed him to the beastly creatures.

Fearing that’s what they will do if he doesn’t replace the book he accidentally ruined, he takes a job tutoring a boy in his neighborhood.

Although nervous about the job, Atticus soon discovers there’s a lot more in store for him than teaching. Never in a trillion years would he have imagined he’d be hiding from monsters, working with ghosts, or searching for werewolves and witches. He’s not brave, and he has no plans to change.

Until he’s forced to.

Meet ten-year-old Atticus Everheart: son, little brother, big brother, straight-A student, book lover, clever, and determined. He doesn’t think there’s anything remarkable about himself, but that couldn’t be further from the truth.

Atticus is child number three out of five Everheart children, small for his age and non-athletic. But he’s okay with this. He loves to read, especially the books tucked in the locked trunk at the end of his brothers’ bunkbeds. Don’t worry; he figured out where they keep the key, but let’s keep that little detail between us because his brothers hate it when he touches their things. Atticus is a happy and good-spirited kid, as long as there is no mention of monsters. He’s deathly afraid of vampires, werewolves, and all the other creatures that go bump in the night. He would rather brave endless tea parties with his little sister, Evie. Or listen to his other sister, Abigail, go on and on about the things for sale in the newspaper—a guilty pleasure of hers for as long as Atticus can remember—before facing anything as scary as a ghost or witch. His fear of monsters is his older brothers’ fault. They’ve threatened to feed him to the beastly creatures on more than one occasion. Atticus wasn’t worried about the threat until he accidentally ruined his brother’s most prized book. Right now, Atticus is looking forward to earning the money he needs to replace the book before his brothers find out what he did.

“These came for you,” said Abigail, the oldest of his younger sisters. At eight, she was already smarter than him in many ways. She turned the envelope upside down over his bed. A pair of prescription, steampunk- inspired goggles tumbled out. Still ignoring Atticus’s prior demand, she settled on the window seat.

“I thought they’d never get here!” His previous statement forgotten, Atticus sat up and took off his glasses. He then slipped the leather strap of the goggles over his head and pulled to tighten them to a perfect fit. He raised his chin, wise and prepared, able to spot danger in a single glance.

“Like a weirdo.” Abigail pulled her honey-brown hair into a high ponytail. “Or a praying mantis.”

He should have known she wouldn’t recognize functional accessories if they stared her in the face.

“Did you have to get green frames?” she asked.

“I think you look smart,” said Evie, the youngest of the Everheart children. She was a miniature version of Atticus, from her curly brown hair, round cheeks, and scrawny arms, right down to her bulbous big toes and curious nature. “Why are there round thingies sticking out from the side?”

“Those are monocles.” Abigail opened the newspaper to the comic section. “They magnify things.”

“These aren’t ordinary monocles,” said Atticus. “I can’t believe you think I’d want goggles if they didn’t do something spectacular. I’ll have you know these are the most advanced pair of monster-seeing goggles available, able to cut through the mundane to reveal beasts and demons, ghosts, and goblins.” At least, that’s what the ad had said. Atticus flipped down the crimson lens. “This one’s for flesh-eating monsters.”

“Oh, they’re way cool!” Evie inched closer and asked, “Do you see any?”

“Yes!” Atticus lunged forward and grabbed her, tickling her waist.

C.L. Colyer found her love for writing in first grade when her class was sent to the library and asked to find a book for their first book report. While she doesn’t still have this book report, she’s very proud to say she got an A on it. Her favorite thing about the book was that it had no words. That’s right, not one! That gave her the freedom to interpret the pictures in any way she wanted and write her own story.

This sparked her love for writing essays. It wasn’t until she was an adult that she sat down and penned her first novel. This story has a special place in her heart because it’s the story that helped her discover her passion for writing. She has since written several books, many of which may never see the light of day, but all of which helped her learn to combine her passion for writing with her fascination with all things mythical. You’ll find examples of this in her novels.