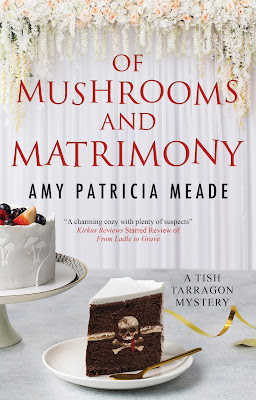 Tish Tarragon is catering for a wedding, but the weekend goes from sweet to sour when a guest at the venue is poisoned.

Literary caterer and owner of Cookin’ the Books cafe Tish Tarragon is pushing thoughts of her impending eviction aside to prepare an appetising welcome buffet for a wedding weekend at Abbingdon Green Bed and Breakfast. While there, Tish witnesses one of the guests, controversial TV chef and restaurant critic, Gunner Randall, threatening staff after missing breakfast and making do with a mushroom omelet.

When Randall is found dead the following day, it soon becomes clear that poisoned mushrooms were behind his demise. With no shortage of potential suspects and motives, can Tish and her new beau, Sheriff Clemson Reade, uncover who was enraged enough with the unsavoury star to silence him for good?

Coming Full Circle
Growing up as a child in New York, I had two primary pleasures on the weekend: going to the library to find the latest mystery and watching Saturday afternoon cooking shows with my mother.

That’s not to say that there weren’t birthday parties and play dates and, eventually in my teen years, mall dates with friends. Indeed, there were many of those, but the typical Saturday routine consisted of me cleaning my room in the morning, Mom and I visiting our local library, and then – if Mom was a bit more flush for cash – a lunch out, followed by a bit of Julia Child, joined in later years by Jacques Pepin, in the afternoon.

The contrast between my mother’s taste in books and mine was quite stark. She would read romance books by the armful, whereas her dark-hearted November child preferred murder. Encyclopedia Brown, Nancy Drew, and Trixie Belden were some of my early faves, soon to be overtaken by the works of Dame Agatha Christie and Dorothy Sayers. Cooking shows, however, were loved by us both. My mother, struck down by rheumatoid arthritis when she was thirty-nine, often found it difficult to maneuverer around a kitchen, so I took over, trying out recipes and learning how to cook the classics.

The Tish Tarragon series was founded to incorporate my love of cooking and mystery. I had written other mystery series (Two historical and one set in modern-day Vermont) but Tish, with its humor, drama, and strong characters, might be the most personal books I’ve written. OF MUSHROOMS AND MATRIMONY, the sixth in the Tish Tarragon series, really brings the themes of murder and cooking full circle. Focusing on the murder of a hated celebrity chef by poisonous mushrooms, OF MUSHROOMS AND MATRIMONY sees Tish interrogating restaurant owners, culinary students, a mushroom farmer, and a legendary television chef who may bear a passing resemblance to a chef I’ve always revered.

Closing the final circle with my childhood, I had the honor of being invited to speak at the very first Greenway Literary Festival in Brixham, Devon in 2019. The two-week long event was held at Agatha Christie’s holiday home on the River Dart and featured both mystery and children’s authors as well as Christie historians. Speaking about my books in the marquis beneath the giant magnolia tree Agatha Christie’s husband, Max, had planted when they first purchased the estate was an experience I’ll never forget.

It’s difficult to believe that the dreamy mystery reading child from Long Island is now writing the books she once loved, but I’m thankful for each and every day I’m able to share my stories with readers and, possibly, a new generation of storytellers. 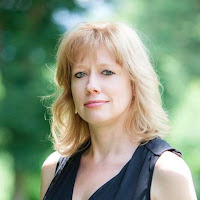 Author of the critically acclaimed Marjorie McClelland Mysteries, Vermont Country Living Mysteries, and Tish Tarragon Mysteries, Amy Patricia Meade is a native of Long Island, NY, where she cut her teeth on classic films and books featuring Nancy Drew and Encyclopedia Brown.
After stints as an Operations Manager for a document imaging company and as a freelance technical writer, Amy left the bright lights of New York City and headed north to pursue her creative writing career amidst the idyllic beauty of Vermont’s Green Mountains.
After five years living in Bristol, England, Amy now resides in upstate New York.
When not writing, Amy spends her time working for her musician husband, watching classic films, testing new recipes, belly dancing, and cleaning cat hair from her lap.
Places to find Amy Patricia Meade:
Website | Facebook | Instagram | Goodreads | Amazon Author Page
You can follow the Of Mushrooms and Matrimony Blog Tour here.