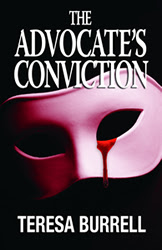 Sabre Orin Brown's clients keep disappearing.  With seemingly no connection between the cases, Sabre enlists the help of her southern PI friend, JP, and her best friend, Bob, to find each of them--before it's too late.  In her race against the clock, Sabre must determine whether contemporary horrors are being buried in the shadow of dark traditions--or if it's something else at work.  A conspiracy years in the making, secrets hidden for decades, and the twisted work of a mysterious society have all come together in the ultimate test of the strength of Sabre's conviction.

I have to admit, I wasn't sure I was going to like this book.  In the first printing of The Advocate's Conviction, the description included phrases like, "a hotbed of Satanic ritual...pointing to the occult".  Definitely NOT my typical read.  But I'm so invested in The Advocate series, I had to read this one.
Satanic activity is mentioned very little in the book.  What is involved is a lot of twists and turns.  In The Advocate's Conviction, things are not always as they appear.  In this installment of the series, you never know who you can actually trust and believe.  In this book, you will come face to face with secrets, kidnapping and murder.  As always, you will be surprised in the end.
The Advocate's Conviction centers around two children who disappear, eight-year-old Cole Johnson and fourteen-year-old Bailey Lecy.  Cole and his four siblings, ages eight to one and a half, are taken away from their single mother due to issues related to truancy and goat blood and chicken feet being found in their home.  Bailey got the attention of social services because she ran away from home several times and also had truancy issues.  Her social worker also suspected drug use.  As with all of her clients, as seen in the previous Advocate books, Sabre will stop at nothing to find out the truth and keep her clients safe, even if it means risking her own life.
I don't want to give away too much information.  I will say that I was so engrossed in this book that I could NOT put it down.  I love Sabre because she's caring and has a really good heart.  I get frustrated with her for probably the same reasons.  It NEVER fails.....Sabre always manages to get herself into trouble, mostly because she refuses to listen to a certain someone.  If only there was some way for JP to handcuff himself to Sabre, she probably wouldn't get into so much trouble.
I truly believe that reading this book is worthwhile.  You will NOT be disappointed.  The Advocate's Conviction is the third book in the Advocate series, however, I feel that it is a stand alone book.  Of the three books, this one is probably my second favorite, following the first one.
Rating: 5
Release Date:  2011
Book Length:  324 pages
Source:  Personal Purchase
Reading Format:  Available in eBook and Paperback