The Advocate's Dilemma by Teresa Burrell 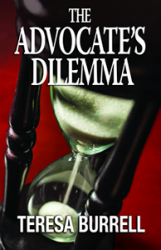 Attorney Sabre Brown's day is going well until she walks into her office and finds a dead man sprawled across her desk.  When Bob, her best friend and colleague, is suspected of the murder and Sabre's minor client has information that might clear him, Sabre has a dilemma.

How does she help her best friend without betraying the confidence of the child she is sworn to protect?

Having been a child advocate herself, Teresa draws from some of the legal cases she's been a part of in order to write her books.  I found The Advocate's Dilemma to be the most raw, intense, in your face book she has written to date.  Stealing a phrase from the book, the issues involved are "worse than murder".
In addition to Sabre, you have characters from the other books making return appearances.  Bob Clark, Sabre's best friend is around to provide comic relief of sorts.  JP Torn, Sabre's private investigator is around to help get to the bottom of things and have her back.  New to the Advocate series is Detective Shane Klakken of the San Diego Police Department.  Detective Klakken and JP have a chilly relationship that goes back twenty years.  The Advocate's Dilemma takes you from the dark and dirty streets of San Diego to the lush beautiful views of La Jolla.
Dilemma centers around the family of fourteen-year-old Riley and eleven-year-old Marcus Foreman; two brothers put into bad situations by their horrible parents.  Their father, George Foreman is a slimy drug user and considered to be scum of the Earth by everyone he meets.  Dana Foreman, their mother, is an alcoholic and a drug user.  The family is initially brought to the attention of the court system because the family is homeless and Marcus is found running around the streets alone at night.
The book starts off with Bob asking Sabre, "Why is there a dead man in your office?".  You can only imagine the roller coaster ride you're about to take.  This book draws from events you hear about in the news but can't possibly imagine.  With mounting evidence pointing to Bob as the killer, he is arrested for the murder of George Foreman, who happens to be his client Dana's husband.  The book doesn't have the immediate action that I am accustomed to from Teresa's previous books, but Dilemma builds up to it.  You're given the opportunity to "ride along with" Sabre and JP as they attempt to find out who killed George Foreman and free Bob from jail.
JP stumbles upon something no one expects and is ready to go to the police with what he knows.  Being a Juvenile Court Attorney, Sabre feels strongly about her sworn oath to protect minor children clients, no matter the costs.  With that in mind, Sabre has to find a way or ways to have justice for her clients, other innocent victims, as well as justice for her best friend.  Through a lot of questioning and research, Sabre and JP are able to expose and break up an illegal ring and find the best possible justice they can.
Readers of previous Advocate books have been asking for a more personal relationship between Sabre and JP.  Maybe it happens and maybe it doesn't.  I don't want to spoil anything.  Sabre did a very good job of not really getting herself into trouble.  She's finally learning to not take risks.  (Or one can only hope.)  You will get a more personal glimpse at John Phillip and there isn't a shortage of his JPisms.  One of my favorites is, "butter my butt and call me a biscuit".
The Advocate's Dilemma will surprise you and keep you guessing up until the very end.
Teresa Burrell and her Advocate series just keep getting better and better.  I love how she is able to mix in so many different story elements at the same time.  I can't wait to find out what's in store for us next.
Rating:  4.5
Release Date:  September 2, 2012
Book Length:  320 pages
Source:  Author
Reading Format:  Available in eBook and Paperback