The Advocate's Betrayal by Teresa Burrell 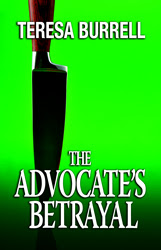 The Killer left nothing behind but a rosary, a kitchen knife and a dead man.  But the dead man is a friend of Sabre Orin Brown.  When his unsuspecting wife is accused of the murder, Sabre will stop at nothing to uncover the truth, even if it means unearthing chilling secrets.

From a San Diego jail to the shady Chicago nightlife, Sabre's search for the true killer forces her to face the question: What do you do when the ones you trust the most are the ones with the most to hide?

If you read my review of The Advocate, then you know I met Ms. Burrell at my local Barnes and Noble.  She gave me a bookmark for The Advocate and one for this book.  The bookmark for The Advocate's Betrayal is what sold me on the books.  Seriously, for a non mystery/suspense reader, I was sold with just "The Killer left nothing behind but a rosary, a kitchen knife, and a dead man."
I loved The Advocate for many reasons.  I went into reading The Advocate's Betrayal thinking it would be along the same lines.  I was wrong.  I wasn't prepared for the intensity and heart-pounding moments Betrayal offered.  The Advocate's Betrayal makes you question just how well you know the people around you.
The Advocate's Betrayal centers around an older couple Sabre knows and is very close to, John and Betty Smith.  Sabre wakes up to a middle of the night phone call from Betty, telling her that John is dead.  Sabre and her new boyfriend Luke arrive at the Smith house to find Betty covered in John's blood.  Betty is arrested for premeditated murder but swears to Sabre and anyone who will listen that she didn't do it.  Sabre believes Betty but something isn't adding up.  Sabre enlists the help of her private investigator, John Phillip (JP) Torn, to help find the answers.
From the very first sentence Betrayal grabs you and keeps you on the edge of your seat.  One thing I've learned from reading Teresa's books is that you should NEVER take anything at face value.  Things are not always as they appear.  Just because you love, care, and trust someone doesn't mean they feel the same way about you.
With The Advocate's Betrayal, you have everything thrown at you, except the kitchen sink.  Betrayal will take you on a journey to numerous states and expose you to love and loss, regrets, lies and untold truths, kidnappings, murder, police corruption and mobsters.  Even if you think you've figured out what's going on, think again.  The ending will shock you and leave you speechless.
I've read Betrayal a couple of times so I already know the ending.  But each time I read it, I could still feel the intensity and I still got those heart-pounding moments.  The Advocate's Betrayal is anything but a love story.  But you will definitely fall in love.