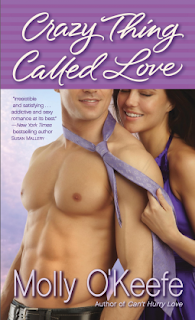 Dallas TV morning show host Madelyn Cornish is poised, perfect, and unflappable, from her glossy smile to her sleek professionalism.  No one knows that her iron will guards a shattered heart and memories of a man she’s determined to lock out.  Until that man shows up at a morning meeting like a bad dream: Billy Wilkins, sexy hockey superstar in a tailspin—still skating, still fighting, and still her ex-husband.

Now the producers want this poster child for bad behavior to undergo an on-air makeover, and Billy, who has nothing to lose, agrees to the project.  It’s his only chance to get near Maddy again, and to fight for the right things this time around.  He believes in the fire in Maddy’s whiskey eyes and the passion that ignites the air between them.  This bad-boy heartbreaker wants a last shot to be redeemed by the only thing that matters: Maddy’s love.

Crazy Thing Called Love is the third book in the Crooked Creek Series.  I’ve read the entire series and can tell you without a doubt, this is the BEST book by far.  If you want a book where the hero has a tortured soul and a less than perfect past, this is the book for you.  I found myself holding my breath one minute and crying the next.  Billy and Maddy are two people you actually want to root for.

Billy Wilkins and Madelyn Cornish aka Maddy Baumgarten are both from the the same working class neighborhood in Pittsburgh.  Neither one of them grew up with money, but they both dreamed of getting far away from Spruce Street.  Their love affair started out when Billy was eight and Maddy was six.  Well, at least for Maddy, it started then, with a little girl’s crush.

Both Billy and Maddy have bad memories of living on Spruce.  Maddy, an only child, had an idyllic family, who may not have been able to give her what her heart desired, but she had a mother and father who both loved her tremendously.  Billy, on the other hand, had an older and younger sister, an abusive drunken father, who left the family, and a mother who used alcohol to dull all of her pain.  In Billy’s house, he was the one who took care of everyone, even though he was only a child.

When Billy was eighteen, he was drafted by an NHL hockey team.  When he was twenty, he married the love of his life, eighteen year old Maddy.  By the time he was twenty-two, he lost the love of his life, due to his inability to treat her properly.  Billy Wilkins is a man full of anger and rage but rightfully so.  His background and the things that he’s had to endure over his life have made him nothing but angry and a fighter.  There was a time during his hockey career when being the number one fighter in the league was what his team needed.  But as things started to change in the league, Billy didn’t.  He just got angrier and caused more and more fights.  His anger and brutality is what brought him back face-to-face with the love of his life Maddy, who now calls herself Madelyn Cornish, the host of Dallas, Texas’ AM Dallas.

For Maddy’s part, she doesn’t want to have anything to do with Billy.  He truly was and still is the love of her life.  But for Maddy, that love cost her herself and her identity.  She’s overcome and sacrificed a lot to become the host of Dallas’ number one daytime talk show.  She believes because Billy is still the fight first type of guy that he hasn’t changed.  And if he hasn’t changed, then her admitting that she’s still in love with him will cost her everything all over again.

But Billy isn’t truly the same guy.  True, he keeps his feelings close to his chest, but he’s a better man than anyone has ever given him credit for.  While on the set, taping a live segment of Maddy’s show, Billy comes face-to-face with members of his family.  Members he hasn’t seen in years.  What ensues forces Billy to come to terms with the person he has become and gives him the strength and courage he needs to become the man he and his family needs him to be.

Maddy realizes her life isn’t what she wants it to be.  She has to truly have a heart-to-heart talk with herself and realize that Billy is offering her everything she has always wanted.  She has to realize that he's willing to give himself to her and love her the way love is supposed to be.

If you're a fan of the Crooked Creek Series, you will be happy to know Luc and Tara Jean make several appearances throughout the book.  You're allowed to catch up with them a little bit.

Sadly, I’ve been told this is probably the last book in the series.  If this is truly the case than Molly did an excellent job wrapping up the series.  The Crooked Creek Ranch series doesn’t get any better than Crazy Thing Called Love.


Books in the Crooked Creek Ranch Series
1. Can’t Buy Me Love
2. Can’t Hurry Love
3. All I Want for Christmas is You (novella-Part of the Naughty or Nice anthology)