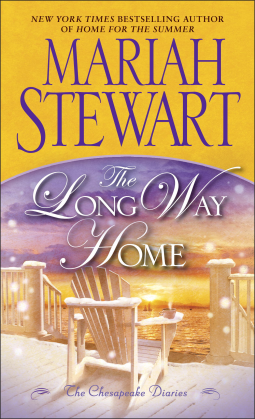 As the only child of a wealthy investment manager, Ellie Chapman has never known anything besides a life of perfect privilege. But her years of good fortune come to an abrupt end when her father is exposed for swindling billions of dollars from innocent investors in a massive Ponzi scheme. And just like that, Ellie loses everything: money, job, home—even her fiancé, who’s jailed as her father’s partner in crime. With no job prospects on the horizon, no cash, and her family name in tatters, Ellie has only one place to go.

Sleepy St. Dennis, Maryland, is hardly where Ellie intends to stay, however. Keeping her identity a secret, she plans to sell the house her late mother left her in the small town and use the proceeds to move on with her life. Unfortunately, her ticket to a new beginning is in dire need of a laundry list of pricey improvements, many of which she’ll have to do herself. And until the house on Bay View Road is fit to be sold, the sole place Ellie will be traveling is the hardware store. But as the many charms of St. Dennis—not to mention Cameron O’Connor, the handsome local contractor who has secrets of his own—begin to work their magic, what begins as a lesson in do-it-yourself renovations might just end up as Ellie’s very own rejuvenation.

Mariah Stewart is one of my favorite authors. I’ve read all of her books in The Chesapeake Diaries series. I can tell you that if you’ve never read her before, you’re missing out. You don’t have to read the first book or any of the other books in the series to understand the characters in this book. In addition to being a contemporary romance author, Ms. Stewart is also a romantic suspense novelist. She manages to add a little unexpected shock to the backgrounds of her characters. This statement is no less true for the main characters in The Long Way Home.

The Long Way Home focuses on Cameron O’Connor, a local boy turned construction company owner and Ellis (Ellie) Ryder Chapman, a woman who has lost everything and has a heritage she doesn't know about.

Cameron has lived in St. Dennis pretty much his entire life. His life’s dream is to one day purchase and own the house at 1 Bay View Road. For Cameron, this house holds precious memories of good times he had as a child, when everything else around him was dark and chaotic.

Ellis has come to St. Dennis, the last place she ever thought she’d go, because she has no choice. Ellis’s one and only job has been heading the public relations department for her father’s company. The same company which no longer exists, since her father, Clifford Chapman, and ex-fiance, Henry stole money from the people who invested with the company and were sent to prison. Since everything Ellis owned was obtained with money from the investment company, the Feds have taken EVERYTHING. Ellis has lost her father, fiance, home, car, jewelry and money.

Because of her father's scheme, Ellis has also lost the people she thought were her friends, all except for one, Carly Summit. When Ellis arrives in St. Dennis, she decides to say her name is Ellie Ryder and that she purchased the house from the Lynley Sebastian estate. Lynley Sebastian was actually her mother, who grew up in St. Dennis and left Ellis the house and it's contents in her will. The catch being that Ellis has to live in the house and can not sell the house or its contents for six months.

Cameron is sent to make sure Ellie is okay and help her see what repairs she needs to do to the old and long vacant house. As part of their repair agreement, Ellie offers to let Cameron have first dibs on the house when she's ready to sell it. As time goes by, Cameron becomes torn as to what is more important to him. The house with it's cherished memories or the woman he realizes he's falling for.

The Long Way Home is full of surprises. When Ellie first arrived in St. Dennis, she had no desire to meet and get to know the people there. However, with St. Dennis being the small, friendly town it is, she didn't really have a choice. It seems some of the elders in town knew exactly who Ellie really was, the minute they laid eyes on her. Cameron himself figured out who she was. It isn't until a new arrival comes to town that Ellie has the strength and courage to own up to who she really is.

I like to call Mariah's books sweet romances, because the language is clean and intimate moments are mentioned but the details are left out. As always with the books in this series, you get a happy ending, with a little drama and discovery thrown it. The Long Way Home is about discovering your past and the legacy you come from. It's about forgiving yourself and knowing that you aren't responsible for the actions of others. It's about discovering that if you just give people a chance, you will allow yourself to finally find your true home.