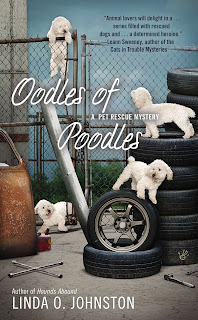 Shelter manager and pet rescuer Lauren Vancouver once again takes on the role of amateur sleuth when there’s a murder on a film set . . .

Has Hollywood gone to the dogs?  Pet rescuer Lauren Vancouver is observing production on a new movie called Sheba’s Story.  The title character—a white Miniature poodle—is played by many similar-looking poodles, and to make sure no animals are harmed, Lauren’s friend, veterinarian Carlie Stellan, and Grant, a handsome representative from the American Humane Association, are on location.  But when the film’s director is killed in a suspicious hit-and-run after arguing with Carlie about animal safety, it’s up to Lauren to clear her friend’s name and catch a killer before someone else ends up in oodles of deadly trouble.


Oodles of Poodles can be purchased at Amazon.

I am really excited to have Linda O. Johnston, author of the Pet Rescue Mystery series, joining me today. I have to say, I am so looking forward to reading this book. Thank you Linda for stopping by and agreeing to answer some questions for me.
Thanks so much for inviting me, Kim! And I really hope you enjoy OODLES OF POODLES, my latest Pet Rescue Mystery which is a February 2013 release.
You’re a part of the Read Humane Program. Can you please tell us more about this worthy cause?
Read Humane is a program started by the Penguin Group, publisher of my Pet Rescue Mysteries. (Berkley Prime Crime is one of their imprints.) Penguin made a $25,000 contribution to the Humane Society of the United States, and also designated several books with animal themes that it published to be part of the program. That included my first Pet Rescue Mystery BEAGLEMANIA. It also included THE SEARCH by Nora Roberts--and she was additionally the spokesperson for the Read Humane program!
I’m just starting to get into Cozy Mysteries. Are your books standalones or do they need to be read in a certain order?
I always make it a point to include enough information in each of my mysteries to allow readers to know who the recurring characters and background are so that the stories can be read out of order. Reading them in order works too, of course.
I love the titles in this series. How do you come up with the titles?
I have to admit that I haven’t been as good at coming up with the titles in the Pet Rescue Mysteries as I was with the Kendra Ballantyne, Pet-Sitter Mysteries. (The Pet Rescue Mysteries are a spinoff from the Kendra series.) Fortunately, my publisher comes through in this, too!
I’ve read Lauren Vancouver’s letter on your website. Even though I haven’t read any of the stories, I find myself liking her and wishing I could talk to her. (Yes, I’m one of those readers who looks at characters in books as sometimes being real. J Please tell me that’s okay.) How did you come up with Lauren’s character?
Oh yes, it’s great to consider characters as real. They certainly stem from real people and real situations--even if the author, like me, hasn’t ever experienced them directly herself!
I started to research the Pet Rescue Mysteries before I began volunteering at a pet shelter (which I do now). When I began my research, I realized how rewarding it was to save animals that way. I also realized that people involved in animal rescue had to develop a bit of a thick skin, since even at no-kill shelters (and that term is defined in many different ways), there are never guarantees about how long it may take to rehome a particular pet--or whether there will be health or behavior issues to overcome. I decided that my protagonist Lauren had to find a way to handle the difficulties. She also needed to have had some adversity in her own life, so I made her a widow with kids. She’d remarried to give those kids a new father--only the new guy turned out to be a louse and she divorced him. But Lauren loves her kids, who are now in college. She also loves animals and will do nearly anything to rescue them. In addition, despite considering herself hard and uncompromising in many ways, she’s very caring and loyal to her human friends and will do nearly anything to help them, too--including solving murder mysteries where those friends are considered suspects. Of course in BEAGLEMANIA, the first in the series, Lauren herself was the suspect she had to clear.
How hard is it to writes a series? And how many will there be in this series?
I love writing a series, or two, or more. Oodles of Poodles is the fourth in the Pet Rescue Mysteries, and right now one more story is planned--and probably a novella, too. Will there be more? I don’t know. It wouldn’t hurt for you, and others, to let the publisher know you’d like to read more of them. (smile)
Can you please tell us a little of what we can expect from Oodles of Poodles?
The background of Oodles of Poodles is the film industry, and it involves a movie about rescued poodles that stars... yes, you’ve got it--rescued poodles! Lauren gets involved because of those cherished and adorable poodles. She’s also involved because one of the film’s co-producers is Dante DeFrancisco, the generous benefactor of HotRescues. Lauren finds herself visiting the film sets often on his behalf--and also to observe how the dogs are being treated. Also present is a Certified Animal Safety Representative™ of the American Humane Association, which is the only group that can provide the coveted “No Animals Were Harmed”® designation--their registered trademark.
One night the director, who had been endangering the poodles during the filming, is run over by a car. Murdered. The chief suspect is Lauren’s good friend, veterinarian and TV personality Dr. Carlie Stellan. Of course Lauren has to find the real murderer and solve the crime to help Carlie... and the dogs.
As I stated before, I’m really looking forward to reading this book. Thank you again for stopping by and answering some of my questions.
Thank you, Kim! 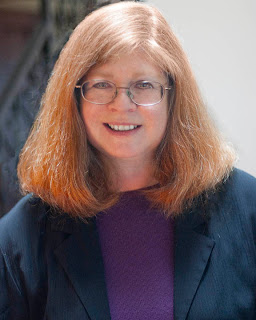 Linda’s new Pet Rescue Mystery series for Berkley Prime Crime is a spinoff from her successful Kendra Ballantyne, Pet-Sitter mystery series.  The Pet Rescue Mysteries debuted in March 2011 with BEAGLEMANIA, followed in October 2011 by THE MORE THE TERRIER and in April 2012 by HOUNDS ABOUND.  OODLES OF POODLES will be published in February 2013.  Protagonist Lauren Vancouver runs a no-kill pet shelter in LA’s San Fernando Valley and will do anything to save animals. In the Pet Rescue Mysteries, “no-kill” means pets, not people!

Linda also writes paranormal romance for Harlequin Nocturne including the Alpha Force miniseries about a covert military unit of shapeshifters.  So far, they include ALPHA WOLF, ALASKAN WOLF, and GUARDIAN WOLF, and the Nocturne Bites "Claws of the Lynx," which is contained in the print anthology AWAKENING THE BEAST.  “Hawk’s Challenge” and “Cougar’s Conquest,” also Nocturne Bites, were published in October and November 2011, respectively. UNDERCOVER WOLF will be published early in 2013.

Linda has also been a transactional lawyer and loves writing contracts as well as fiction.  She has taught courses on romance writing at the California State University, Northridge College of Extended Learning and The Learning Annex in Los Angeles.  She has spoken on romance writing and mystery writing at various chapters and conferences of the Romance Writers of America, Sisters in Crime chapters, the Independent Writers of Southern California, and the Surrey Writers’ Conference.  She has additionally presented a variety of programs at libraries and bookstores.