5 Star Review ~ FALLING FOR THE MARINE by Samanthe Beck 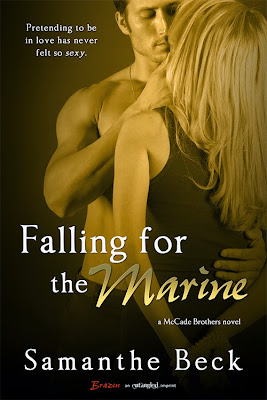 USMC helicopter pilot Michael McCade has two goals: Get his damn back into alignment and keep his nose clean until his commanding officer clears him to fly again. The doctor-recommended massage therapy seems like a necessary step toward returning to the cockpit, but when his too-hot-to-handle neighbor, Chloe Kincaid, turns out to be his masseuse, he strays from the straight and narrow in a major way.

Chloe Kincaid is looking for a simple, no strings attached, ego-boosting hook up. But when her positively panty-melting neighbor, USMC Major Michael McCade, (aka Major Hottie), shows up on her massage table, she lets desire get the better of professionalism. Now they're pretending to be engaged to avoid a whole lot of unanticipated consequences of a momentary lapse in judgment. But can a girl who avoids attachments at all costs fake an engagement to a straight-arrow soldier without falling hard?

I don’t even know where to start with saying how much I enjoyed, okay, LOVED this book.  Samanthe Beck has completely surprised me with a hero who has just blown me away.

My first impression of Falling for the Marine was that it was different from the two previous books in the series; you don’t have to read them to love and enjoy this one.  Lover Undercover and Wicked Games both had a suspense element that isn’t found in Falling for the Marine. The overall feeling of the book is different.  As usual, Samanthe brings humor into her writing.  And of course, the sex is hot.  An argument can even be made that this book is hotter than the previous books.

USMC Major Michael McCade is a Marine helicopter pilot who hasn’t been able to fly as a result of an accident that messed up his back.  Michael is pretty much a straight-laced Marine who loves his family, his country, and the Marine Corps.  Michael is tired of the fly by night relationships he’s been having.  He’s starting to think about having a serious relationship with someone he can come home to.

Chloe Kincaid just wants to have some fun with an actual guy and not just with the friend, Ready Teddy.  Chloe had a less than ideal childhood and after her parent’s failed marriage knows that a man in uniform will not work for her. Chloe made the mistake of marrying a man who she thought could give her the life she’s always wanted.  Boy, was she wrong.  Chloe has spent the last year being a traveling masseuse, trying to prove to herself that she isn’t a needy woman.

After hearing about the opening scene where Michael has to come to the rescue of a handcuffed, lingerie clad Chloe, I wanted to read the book.  I just HAD to know what was in store for these two.  I got more than I bargained for.

A day after the “rescue”, Michael and Chloe are both surprised to find out that Chloe is Michael’s masseuse.  Things were already a little tense between these two the night of the rescue.  But with a naked Michael laying on Chloe’s massage table, things definitely heat up and become awakened.  When the line between personal and professional gets blurred, Michael must come to Chloe’s rescue again.  In return, Chloe has to rescue Michael, in the form of pretending to be his fiancé.

Like Chloe, I said I would never fall for a man in uniform.  And like Chloe, I fell head over heels in love with Michael.  I mean he’s my dream guy in every possible way.  Michael is funny, caring, loving and knows how to please a woman no matter where they happen to be.

Falling for the Marine is a dream romance that will have you laughing, crying and begging for more.

Purchase Falling for the Marine from from Amazon and other eRetailers