Review ~ A LOVE OF VENGEANCE by Nancy Haviland 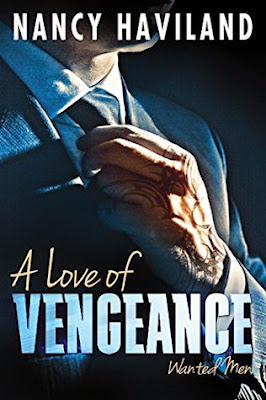 
Once the most feared member of an Italian Mafia crime family, Gabriel Moretti returns to New York at the request of his mentor, Russian crime boss Vasily Tarasov. Vasily needs someone he can trust in Seattle to protect his estranged daughter, Eva Jacobs, while he avenges the murder of the young woman’s mother. Gabriel is unstoppable in a fight, whether he’s using fists, blades, or bullets; but innocent, onyx-haired Eva may just be the most dangerous—and beautiful—thing he’s come up against.

Intense sparks fly between the two, tempting Gabriel to mix business with pleasure while in the Emerald City. But once word gets around that Gabriel has shown up in New York, Stefano—his vengeful brother and the de facto head of the family—decides that Eva is the key to ending the feud between them…permanently.

In this pulse-pounding romantic thriller set against the backdrop of New York City’s storied underworld, loyalties will be tested, secrets will be told, and mob justice will be served.

REVIEW
A Love of Vengeance has everything that you could possibly ask for in a romantic suspense.  The two main characters spent a lot of time romancing each other.  And there was plenty of situations that kept you on the edge of your seat waiting to see what would happen.  Gabriel Moretti is the rightful heir to the Moretti crime family but he walks away from it to attempt to lead a more reputable life.  He even changes his last name.  That doesn’t mean that Gabriel isn’t both feared and respected in the mafia world.  One of the people that respects him the most is Russian crime boss Vasily Tarasov.  Vasily asks Gabriel to protect his secret daughter Evangeline “Eva” Jacobs while Vasily heads off to Russia to hunt down the people that killed Eva’s mother. Unfortunately, Gabriel must also protect Eva from his vengeful brother Stefano who is the current head of the Moretti crime family and hates Gabriel.

Everything that affects these characters is rooted in their past.  Vasily abandoned Eva and her mother so that they would not get caught up in the violence that comes with mafia life although it catches up with them anyway. Stefano wants to kill anything that Gabriel cares about because of a tragedy that affects Stefano’s fiancee’.  And Eva loses her mother because of the sins of her father.  In retrospect, it could be said that this is what happens when you try to escape fate.  There are so many details that I just can’t give out because you have to experience the suspense for yourself.  Needless to say, I couldn’t wait to finish the book.

To be fair, the romance did not disappoint.  Gabriel is smitten with Eva the first time that he sees her photo.  He knows that he shouldn’t get involved with her but he can’t deny their attraction.  The sex between them is explosive and Eva is taken to places that she has never gone before.  Gabriel’s growing affection for Eva forces him to face all of the demons from his past and become the man that he needs to be.

Purchase A Love of Vengeance from:
Amazon | Barnes & Noble | Goodreads