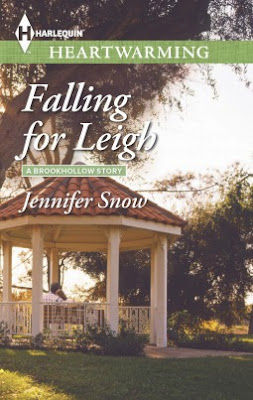 Can she be his cure for writer's block?

For New York novelist Logan Walters, falling for the girl next door was more than a cliché. It was a calamity! If Leigh Norris hadn't been so attractive, and hadn't been hammering relentlessly while he was trying to write, Logan would never have ascended her rickety ladder in a misguided mix of gallantry and frustration. And he wouldn't have a broken wrist—or a guilty new assistant who can't type. Clearly, his escape to the Brookhollow B and B was not going to be the quiet, idyllic retreat he needed to finish his overdue manuscript. But it was fast becoming much more interesting than expected….

Hi Logan.  Welcome to Read Your Writes Book Reviews.  You are no stranger to interviews, being a New York Times Bestselling Novelist.

Thank you for having me.  This is definitely the first interview about my love life though.

I’ll try to be as gentle as possible.  First question that I’m sure everyone is asking themselves-why on earth did you climb that ladder?  I mean, the thing was an accident waiting to happen.

Laughing - I have asked myself that question a million times.  All I can say is I saw this beautiful woman determined to hang the sign on her house-driving me crazy in the process-and I felt compelled to help.  I also wanted the noise to stop.

Then you break your wrist and the noise is the least of your problems.  Why didn’t you just pack up and head back to the city?

I was tempted to do just that, but I was in the middle of a custody battle for my daughter and the thought of being in the empty, quiet apartment without her was worst.  Also, I was avoiding my agent and my book editor.

So, Leigh can’t type.  How was the process of trying to work with her?

Slow and painful.  (Laughing)  But it gave us a lot of time together, which I was grateful for.  Soon, the nightly work sessions were more about getting to see her than finishing the book.

But you were never planning to stay in Brookhollow.  In fact, you thought you might have to move to California to be closer to your daughter.  What changed?

Luckily, the judge saw things my way in court and we were free to move anywhere.

And Brookhollow was where you wanted to be?

Leigh was where I wanted to be.

That’s so sweet.  What was it about Leigh that first attracted you?

She was so brave, having been through what she had, and still wanting a family, wanting to be a mother…She was so great with her daycare kids and I knew she would be a terrific mother to my own daughter.  And then, as I got to know her even more-the passion between us was undeniable.

And what about your writing career?  Can we expect anything new from you now that your series is finished?

Well, I can’t say too much…but yes, there’s a new project in the works.

Hmm.  Sounds intriguing.  Spoken like a true mystery novelist.  Well thank you Logan.  I appreciate you being here today and I wish you all the best in your career and love.”

Thanks for hosting me.

Tour wide giveaway ~ Leave a comment here and at other stops for a chance to win a copy of all 4 e-books in the series so far.  All commenters will also be entered to win a prize pack of - a $50.00 Amazon giftcard, signed books, and Brookhollow Swag.  (Be sure to leave your email address, in case you are selected as a winner.)

Jennifer Snow lives in Edmonton, Alberta with her husband and four year old son. She is a member of the Writers Guild of Alberta, the Romance Writers of America, the Canadian Author Association, and SheWrites.org.  She is also a regular blogger on the Heartwarming Authors site and is a contributing author to Mslexia Magazine, WestWord Magazine and RWR.  Her 2013 Holiday Romance-The Trouble With Mistletoe was a finalist in the 2014 Golden Quill Contest and the Heart of Denver Aspen Gold Contest.