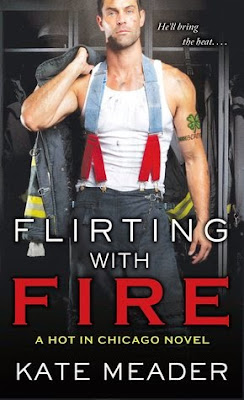 The first installment in Hot in Chicago, a brand-new, sizzling series from Kate Meader that follows a group of firefighting foster siblings and their blazing hot love interests!


Savvy PR guru Kinsey Taylor has always defined herself by her career, not her gender. That is, until she moved from San Francisco to Chicago to be with her fiancé who thought she wasn’t taking her “job” of supporting him in his high-powered career seriously enough—and promptly dumped her for a more supportive and “feminine” nurse. Now, as the new assistant press secretary to Chicago’s dynamic mayor, she’s determined to keep her eye on the prize: no time to feel inferior because she’s a strong, kick-ass woman, and certainly no time for men.

But that all changes when she meets Luke Almeida, a firefighter as searingly sexy as he is quick-tempered. He’s also the second oldest of the Firefightin’ Dempseys, a family of foster siblings who have committed their lives to the service—if Luke’s antics don’t get him fired first. When Luke goes one step too far and gets into a bar brawl with the Chicago Police Department, Kinsey marches into Luke’s firehouse and lays down the law on orders from the mayor. But at Engine Co. 6, Luke Almeida is the law. And he’s not about to let Kinsey make the rules.

REVIEW
In reading Flirting with Fire by Kate Meader, I committed a reader 101 mistake.  I went in thinking it was going to be like her other series.  I was looking for humor immediately.  Flirting with Fire has its humorous moments, but it’s filled with characters that have real issues, pain, and scars.

Flirting with Fire is the first full length novel in the Hot in Chicago series.  If you read Rekindle the Flame from the Baby, It’s Cold Outside anthology, then you're in for a treat with the return of Beck and Darcy.  But Flirting with Fire is a standalone read and all about Luke Almeida and Kinsey Taylor.

Like all the Dempsey kids, Luke was taken in by Sean and Mary Dempsey at a young age.  Also, like his foster siblings, Luke is a firefighter at Chicago’s Engine Co. 6.  Saving lives and family are important to him.  Luke is so into protecting his family and not thinking about himself, that he doesn’t think twice when someone gets handsy with his little sister and he punches the guy. Too bad the punch was recorded and then went viral.  Now, the mayor of Chicago is looking to clean things up.  He sends Kinsey to the firehouse to make Luke and the company look good.

Kinsey knows the PR game like it’s the back of her hand.  She has some serious plans to make Luke and Chicago’s finest, smoking hot men look good.  Double whammy for Luke, because he doesn’t feel like playing nice and he has to in order to keep his job.

Kinsey is one of those heroines you have to love.  She’s a sassy, competitive, self-assured, take no prisoners kind of girl.  My one complaint about her is that she let her broken heart (yes, it was BADLY broken) control her life for a little too long.  But when she goes up against Luke, her competitive nature is accepted and their banter is combustible.  Kinsey and Luke are simply perfect for each other.  They understand each other like no one else in their lives has ever done.

I love the secondary storyline of Gage, Luke’s youngest brother.  I just wish that he could get his HEA with his favorite Chicago chef, Brady.  I’m seriously pulling for these two.

What I disliked about the book is actually one of the things that allowed the book to take place...city politics.  With the Dempsey foster siblings, it’s all for one and one for all.  They like to push the boundaries and sometimes step over the line.  This attitude of theirs is sure to continue throughout the rest of the series.  Thus, city politics, Mayor Eli Cooper, and his biggest backer and Dempsey hater, Sam Cochrane are sure to continue playing roles in the upcoming books.

And speaking of Mayor Eli Cooper, you get a glimpse of something between him and the only Dempsey girl, Alex.  Their story is up next and I’m sure Playing with Fire is definitely going to live up to its name.  Can’t wait to read it.

You can read my interview with Kate here.  There’s also a giveaway.

The Hot in Chicago Series: