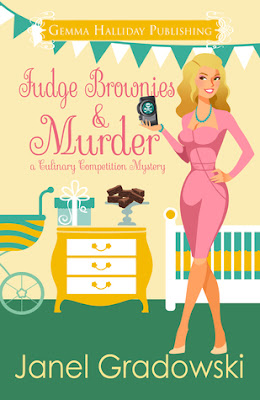 Culinary whiz and reluctant amateur sleuth, Amy Ridley, has a lot on her plate. Her very pregnant best friend, Carla, can barely move from her couch per doctor's orders. So Amy is tasked with preparing meals for the expanding family along with baking endless pans of brownies to quench Carla's pregnancy cravings. Not only is she playing chef, but she's also trying to convince the mommy-to-be that she needs to have a baby shower. But when a restaurant owner is murdered at a blogging conference, Amy finds herself in a race to catch the killer before the baby is born.

As Carla's baby bump gets bigger, so does the list of suspects. While Amy pares down the potential murderers and staves off disgruntled cooking competition rivals, the clock ticks down, the baby's arrival draws closer, and the danger grows stronger! If Amy doesn't watch her back, she may be the next member of the competition going down.

**Recipes Included!**
REVIEW
Fudge Brownies & Murder is my favorite book in the Culinary Competition Mystery series.  It is the fourth book in the series but can be read as a standalone.  Amy Ridley is spending a lot of time creating brownie recipes and making brownies for her very pregnant, bedridden best friend Carla Shepler.

Amy’s also working overtime trying to convince Carla she needs to have a baby shower.  I have to admit, going into the story, I was ready to not like Amy because of her pushiness. I thought she was trying to push her wanting to have a baby shower onto Carla.  In the past, I found Amy to be a little irritating, in wanting Carla to do what she wanted her to do.  As it turns out, in the end, Amy just wanted to give Carla a baby shower as something to look forward to, instead of being miserable stuck on the sofa.

There are a couple of reasons why I liked Fudge Brownies & Murder:

I’ve read all the books in this series.  I love the way Janel has written her characters (Amy and Carla), allowing readers to see them grow as people, with their lives evolving. I’m looking forward to seeing what else is in store for Amy, Carla, and the rest of the people in Kellerton, Michigan.  Oh, it should be noted that while the story is told in third person, it is told with Amy and Carla alternating in telling the story.