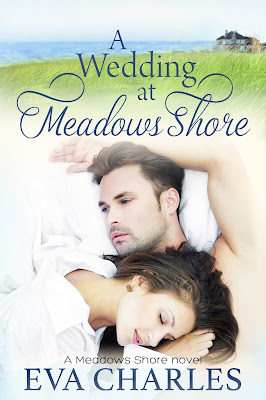 Meadows Shore is the childhood home of the five Clayton sisters and the six Harrington brothers, the family seat where these irresistible characters gather regularly…or whenever they need the comfort of Portuguese home cooking and the love and wisdom of elder women.
After Sophie Clayton catches her husband in bed with a young intern, she creates a new life for herself as the executive director of a failing domestic violence agency. It’s the perfect job for a woman born to fix everything. A friend’s broken heart, a tattered agency, a flat tire—she’ll roll up her sleeves and make it as good as new. Sophie rarely encounters anything she can’t fix…until she meets the devastatingly handsome and insufferably arrogant, Max Parker. One of Boston’s most eligible bachelors, he’s never without a stunning young woman on his arm and in his bed.
When Sophie’s forced to deal with Max, sparks fly, and somewhere in the crossfire of verbal daggers and clever barbs, she discovers his darkest secret.

“Do you mind if I throw this in the freezer?”
“Of course not, dear. You may need to move a few things around, but there should be plenty of room. Max, my hands are wet, would you help Sophie get that ice cream into the freezer—the one in the pantry. What flavors did you end up making?”
Sophie headed toward the pantry off the kitchen. “Coffee for Daniel, vanilla, and mint chocolate chip. I thought they’d all work with chocolate cake.”
He took the cooler from her. “You made the ice cream?”
She nodded, opening the freezer.
“I’m impressed. Mint chip is my favorite.”
“Really? I would’ve pegged you more as a rocky road kind of guy—dark, with bitter chunks, and nuts—not too smooth.”
He could only see her back at the moment, but he knew her eyes were twinkling and the corners of her mouth were curved up. He could hear it in her voice.
He grabbed a piece of ice from the freezer and reached around her, touching the icy half-moon to the hollow of her neck, the sweet spot right where it meets the collarbone. The very spot he wanted to kiss. She jumped, startled by the unexpected cold against her skin, and raised her hand to swat him away.
“I don’t think so,” he crowed. Letting the ice cube fall to the floor he grabbed both her wrists, holding them while she struggled to get free. He leaned against her, pinning her between his body and the refrigerator door. Even the chill from the open freezer wasn’t enough to cool what was smoldering between them. He could feel her pulse racing, saw her lips part in anticipation. He bent to kiss her, but caught himself just in time, emitting a low growl instead. As much as he wanted it, this wasn’t the time or the place to steal a kiss.


Purchase A Wedding at Meadows Shore from:
Amazon | Goodreads

The Meadows Shores Series:
The second book in the series, My Sweetest Sasha releases June 1, 2016.  You can pre-order it here.

Eva Charles is the author of the multi-titled Meadows Shore Series that chronicles the lives and loves of the Clayton-Harrington family. She invites you to visit their beloved Meadows Shore nestled in the charming seaside town of Fair Harbor, where you’ll enjoy love, laughter, loyalty, and an abundance of mouth-watering food, Portuguese style.
After being a confirmed city-girl for more than thirty-five years, Eva moved to beautiful western Massachusetts in 2014. There, she found herself living in the woods with no job, no friends (unless you count the turkeys, deer, and coyotes roaming the backyard), and no children underfoot, wondering what on earth she’d been thinking. But as it turned out, it was the perfect setting to take all those yarns spinning in her head and weave them into a romantic tale.
When she’s not writing, trying to squeeze information out of her tight-lipped sons, or playing with the two cutest dogs you’ve ever seen, Eva’s creating chapters in her own love story.

Follow the A Wedding at Meadows Shore Blog Tour here.