Review ~ TO LOVE A WOLF by Paige Tyler 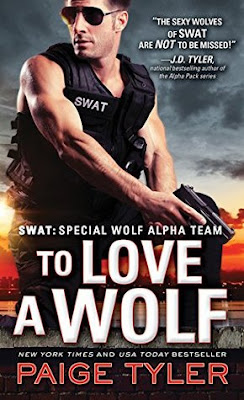 HE'S FOUND THE ONE...
SWAT officer Landry Cooper is certain Everly Danu is The One. The problem is, she has no idea what Cooper really is. And as much as he wants to trust her, he's not sure he can share his deepest secret...

BUT CAN HE KEEP HER?
When Everly's family discovers Cooper's a werewolf, her brothers will do anything to keep them apart-they'll kill him if they have to. Everly is falling hard for the ridiculously handsome SWAT officer, and she's not about to let her brothers tell her who she can love... Until Cooper's secret is exposed and she discovers the man she thought she knew is a monster in disguise.

To Love a Wolf is the fourth book in Paige Tyler’s paranormal romance series SWAT. As with the previous books, it focuses on a SWAT team composed of Werewolves in Dallas and their journey of finding “The One”. To Love a Wolf centers around former Army Explosive Ordnance Disposal Staff Sergeant Landry Cooper who is currently a member of the aforementioned SWAT team.

Cooper finds his soulmate in the midst of a bank robbery. Her name is Everly Danu and she is an artist. They start out as a cute couple with tremendous sexual attraction that gets supercharged once they take their clothes off. However,tragedies related to both of their paths will come back to haunt them in unexpected ways that will have profound effects on their future together. Although that does make for some good drama, it also makes the book a little too predictable. There are just too many instances where I knew what was going to happen too early. I know that this series isn’t exactly grounded in suspense, but I would have still liked to see some new twists and turns that would have kept me on my toes. There is one tidbit about the death of Everly’s mother that was intriguing but that was about it. Everything else was typical.

I continue to like the team of werewolves and the series as a whole. I just hope that Paige doesn’t write herself into a corner. Considering the size of the team, she could write at least ten more books but she has to raise the stakes and be more original.

Purchase To Love a Wolf from:
Amazon | Barnes & Noble | Goodreads