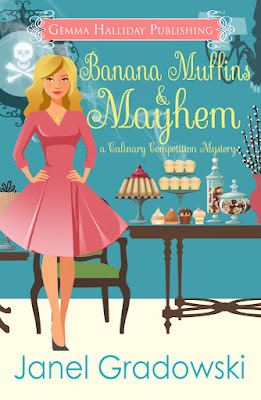 Culinary competitor Amy Ridley is as excited as anyone in Kellerton, Michigan to have DIY Home Improvement star, Phoebe Plymouth, come to town for the first annual Cabin Fever Cure event. However the TV personality’s sour attitude quickly curdles people’s opinion of her. When she’s found dead, at the business owned by Amy’s husband, Alex, the heat is on to catch the killer before his professional reputation is ruined!

Told in third person, but alternating between best friends Amy Ridley and Carla Shepler, Banana Muffins & Mayhem continues to follow their lives as they deal with life changes and solving murders.  This installment of the Culinary Competition Mystery series finds Carla questioning her decision to become a stay-at-home mom, feeling overwhelmed taking care of her four-month-old daughter and worrying about her detective husband. While the story finds Amy wondering if she wants to be a parent and whether or not society will think there’s something wrong with her if she chooses not to.

While going to visit her husband Alex at his company, Quantum Media, Amy discovers the body of home improvement tv show hostess Phoebe Plymouth outside of the business.  When a new and inexperienced detective zeroes in on Alex and his employees, Amy makes it her mission to find out who the true killer is.  But while Amy is investigating, her life as well as Alex’s is put in jeopardy.

I found myself enjoying the storytelling and forgetting I wanted to solve the murder as much as Amy did.   I ultimately found myself completely blindsided by the murder and why they committed the crime.

Banana Muffins & Mayhem is the fifth book in the Culinary Competition Mystery series.  Having read all the books in this series, I’ve enjoyed watching the characters lives progress and I can’t wait to see what else is in store for them.  It should be noted that this is a true stand alone read. 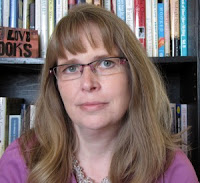