Review ~ THE CEO BUYS IN by Nancy Herkness 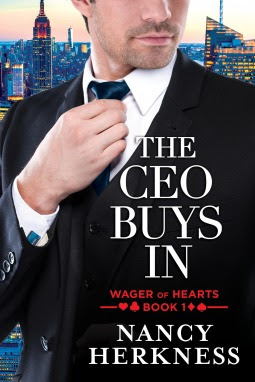 Self-made billionaire Nathan Trainor feels restless and disillusioned. His company may be thriving, but he can’t find a woman who sees him for more than his wealth. With his love life in the red, he meets two other billionaire bachelors at the ultra-exclusive Bellwether Club. The three of them make a wager of the heart: they must find women who love them for who they are, not their money.

Savvy office temp Chloe Russell is trying to scrape together the money she needs to support her grandmother. So when a flu epidemic strikes Trainor Electronics and she’s promoted to Nathan Trainor’s assistant, she jumps at the lucrative opportunity. But then Nathan himself falls ill, and he and Chloe must work from his penthouse while he recuperates. Before long, it’s clear there’s genuine heat between them, and it’s more than just a fever spike. Will Nathan win Chloe’s heart—and the bet? Or will their differences destroy any chance for love?

Three billionaires walk into the exclusive Bellwether Club and make a drunken bet.  Sounds like the start to a bad joke.  But it’s actually the premise of Nancy Herkness’ Wager of Hearts series.  Self-made billionaire Nathan Trainor, Quarterback Luke Archer and author Gavin Miller have had it with women who only want them for their money and what they can do for them.  In a drunken encounter, the three make a bet to find true love within a year’s time.

When The CEO Buys In first came out, I remembered seeing the cover and thinking I might want to read this book.  When Nancy contacted me about reviewing the second book in the series (The All-Star Antes Up) I was so excited I couldn't say no.  She ended up sending me both books to review (thank you) and she even did an interview with me.  As I was talking up the books on social media, I kept thinking I want to read these books.  Sometimes talking up a book so much puts high expectations on the book that it can't possibly live up to.  I’m happy to say that The CEO Buys In did not let me down.

Nancy has written two characters who are easy to like.  Nathan Trainor is a self-made billionaire who is just a little bit out of touch with the rest of the world.  He has a chip on his shoulder from wanting to prove his father wrong.  He also has forgotten what it’s like to do something he loves to do.  Chloe Russell’s sole goal in life is to take care of herself and her elderly grandmother.  She’s smart, sassy, and is extremely good with people.  She has been jaded by stories told to her by her inventor father that have shaped her view of the corporate world.

While working a front desk temp position at Nathan’s company, Chloe is promoted to his personal assistant when a flu epidemic hits the company.  Nathan is all about business and when the flu hits him, he insists Chloe works with him at his penthouse.  Over the course of their confinement together, the two eventually fall into a sexual relationship.  The more time they spend together, the more they realize they could have something real.  These two are so good together.  Chloe has this ability to see through Nathan, challenge him, and force his hand for his benefit.  Nathan thinks all he has to give Chloe is his money, but soon realizes she doesn’t care about the billionaire man, she just wants the man himself.

I really liked The CEO Buys In.  The only reason it doesn't get a five star rating from me is because it didn't move me to tears or tug at my heartstrings.  But this is definitely a solid book, one worth reading.  As I mentioned before, I really liked the characters.  Gavin Miller, the author of the group is currently a little not to my liking.  I think that’s probably because he has a weird sense of self-deprecating humor and likes to “poke the bear”.  Luke Archer, the quarterback, definitely has me wanting to know about him.  I can’t wait to read his story in The All-Star Antes Up.

Purchase The CEO Buys In from:
Amazon | Barnes & Noble | Goodreads

You can read my interview with Nancy here. 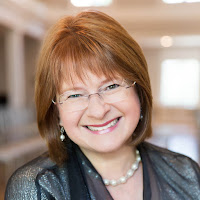