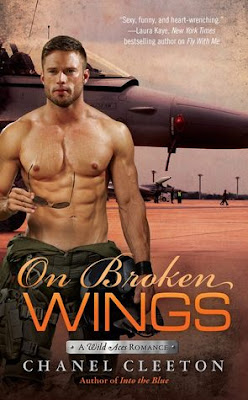 The author of Into the Blue and Fly with Me returns with the newest, hot and high-flying Wild Aces romance...

A year after losing her husband, Joker, the squadron commander of the Wild Aces, Dani Peterson gets an offer from his best friend, Alex “Easy” Rogers, to help fix up her house. Dani accepts, and their friendship grows—along with an undeniable attraction.

Racked by guilt for loving his best friend’s widow, Easy’s caught between what he wants and can’t have. Until one night everything changes, and the woman who’s always held his heart ends up in his arms. Yet as Easy leaves for his next deployment, he and Dani are torn between their feelings and their loyalty to Joker’s memory.

But when Dani discovers something that sends them both into a spin, the conflicted lovers must overcome the past to navigate a future together…

REVIEW
If Chanel Cleeton hasn’t already established herself as an amazing author, she’s done so with On Broken Wings.

On Broken Wings is the story of two people struggling with the tragic death of someone very close to them.  Dani Peterson has lived the life of a military wife for years.  She’s endured separations because of her husband’s deployments, she’s dealt with missed birthdays and anniversaries.  She’s been strong because she’s had to be.  The last two years of Dani’s life has been filled with tragedies.  She’s lost the baby she desperately wanted to have and her husband died on a training mission.  Throughout all of her tragedies, she’s always has been able to count on Easy, her and her husband Michael’s friend.

Alex “Easy” Rogers fell in love at first sight, when he laid eyes on Dani Peterson.  He had no idea she was married to his Squadron Commander and friend, Michael “Joker” Peterson. When he realized Dani was married, he tried desperately to keep his feelings in check. Something that was very hard to do when he saw her constantly.  During the last few years, it was Easy who was Dani’s shoulder to cry on or pillar of strength when the world came crashing down on her.  Easy’s love for Dani is so strong that if he could, he would have traded places with Joker, to save her from the pain she endured after he died.  Easy’s admiration for Dani hasn’t gone unnoticed.  His best friends, Burn and Thor, and their significant others know Easy has feelings for Dani.  They either feel sorry for him or tell him he needs to get control of his feelings, “Don’t you get it by now? There is no one else. There never will be anyone else.  There’s just her.”  Easy definitely has it bad.

On Broken Wings is a standalone read.  However, I fell in love with Easy in the first book, Fly with Me.  In that story, you got to see the depth of Easy’s feelings and how he was there for Dani no matter what.  I couldn’t wait for his story to be told.  I knew it was going to be special.  I just had no idea how special.

Easy is one of my favorite heroes.  He's beyond special.  He says the right things.  He does the right things.  Dani is his perfect heroine, because she sees the special side of him that he tries to hide from the rest of the world.  She’s special and amazing in her own right.  From beginning to end, On Broken Wings had my attention and never let it go.  It wasn't predictable. It was heartfelt, bittersweet, touching, and loving.  Chanel has written a story that will break your heart, but at the same time put it back together.

**Received a copy of the book from Berkley and voluntarily reviewed.**

The Wild Aces Romance Series:
(Clicking the book covers will take you to Amazon.)

Fly with Me ~ Review
Into the Blue ~ Review

After years spent studying international politics in London and a stint in law school, Chanel Cleeton found her passion crafting smart and sexy contemporary romances and thrillers. An avid reader and hopeless romantic, she's happiest curled up with a book, her three dogs lounging beside her. Chanel is a lover of big sunglasses, irresistible handbags, food covered in sprinkles, and pint-sized pups with larger-than-life personalities.

She is published by Harlequin and Penguin and is the author of the International School, Capital Confessions, Assassins, and Wild Aces series.