Interview & Excerpt ~ A KISS IS JUST A KISS by Melinda Curtis 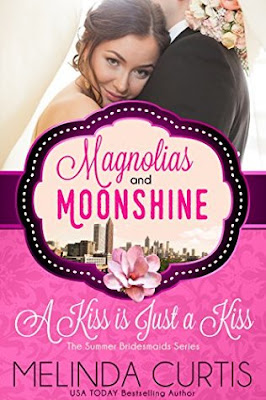 Kitty Summer has a wedding to stop. She's sure the groom doesn't love her sister, but how can she prove it? By testing his fidelity with one very public kiss, of course.

That one kiss leaves Kitty stranded in Florida without her purse or cell phone and with her dotty grandmother and one jilted groom, aka Beck O’Brien. With only her bridesmaid dress to her name, Kitty needs Beck to help her get Granny back to Atlanta. And Beck needs Kitty to help him locate his bride so he can win her back. But the closer they come to finding Maggie, the more Beck wonders if a kiss is just a kiss.

Hi Melinda.  Welcome to Read Your Writes Book Reviews.  Thanks for being here.
Hey, Kim. Thanks for hosting me today.

I did. It was fun.  Now, we all know a kiss is not just a kiss. I have a feeling that in A Kiss is Just a Kiss Kitty and Beck are going to discover that.  Tell me what you love about these two.
I love that Kitty, as the oldest of 5 sisters, will do anything to protect her siblings, including hurting their feelings by stopping their wedding. Beck was raised by parents that loved each other to the exclusion of anyone or anything else. He’s trying to protect himself from love by marrying someone he likes a lot (a fact Kitty finds unacceptable).

Beck wants to marry for like and not love?  Is that because his parents were too busy loving each other that they couldn't or wouldn't allow themselves to love anyone else?
Yes. Beck has a fear that he'll love someone and they won't love him back.

Finding out Kitty thought Beck didn’t really love her sister Maggie and decided to kiss him in front of everyone got my attention.  I remember thinking, “Oh yeah.  I want to read this book.” Then I started thinking, “Wait. She kissed her sister’s fiancee and now they’re going to be a couple.  This can get a little weird.” How do you think your characters (Kitty, Beck, Maggie and the rest of their family) would react at holidays, when they’re all together?
Oh, there will be tension, that’s the joy in writing a series! But they are a close family and this isn’t the first time one of the girls has kissed another’s beau as a way of proving their affection. Maggie is going to be upset with Kitty and Beck and herself. But she isn’t the only one who came into that failed marriage for all the wrong reasons.

I believe your Summer Bridesmaid series, which A Kiss is Just a Kiss is a part of is a reboot or spin-off of your Bridesmaid series.  Tell me what readers can expect from the Summer Bridesmaid series and if any characters from the Bridesmaid series will make cameo appearances.
The original Bridesmaid series followed the romance and wedding of Tiffany Bonander, who happens to be a cousin of the Summer girls. The premise of each story is based on the heroine being a bridesmaid. Tiff will be an occasional bridesmaid and supporting player in some of the installments. Each bridesmaid story has an underlying rom-com premise – the horror of autocorrect when you’re interested in a guy, the awkwardness of the morning after, rescuing the groom, needing a date for the wedding, etc. When I was young, my mom forced me to watch the old black & white romantic comedies she grew up on and I love to incorporate some of the old tropes with a new twist.

What’s your favorite part of a romance story to write?  (The beginning, the first meeting, first kiss, getting to know each other, first love scene, big fight, HEA or something else?)
My energy is highest in the first few chapters where the trouble starts and the hero and heroine meet. But there’s something incredibly intriguing about figuring out the thoughts and feelings that lead someone to fall in love. It’s like working a really challenging puzzle. It’s much slower to piece together (for me, writing sweet romance) because I can’t rely on sex to be a catalyst for feelings to change.

What are you currently working on at the moment, besides making DIY improvements to your house?
I’m finishing up a single title romance that was requested by a traditional publishing house. Then I need to write a holiday novella for a box set, installment #11 in my Harlequin Heartwarming Harmony Valley series, and a mid-length book for a multi-author series…That’s my next five months in a nutshell. Once that’s done, I can write a couple more Summer Bridesmaid installments.

Melinda, it was very nice meeting you at RT in Atlanta and catching up with you today.
Thanks, Kim. It was great meeting you. I look forward to seeing your uplifting smile at RT in Reno! Happy reading!

The music began for the bridesmaid procession and the first bridesmaid appeared. It was Kitty. Like all bridesmaids, her dress was the color of a bright margarita (his favorite mixed drink–there was a sign!). The wedding planner had insisted the bridesmaids needed full skirts to balance the massive girth of Maggie’s dress. Getting within kissing distance of his bride for pictures this morning had been about as tricky as walking with Bingley after he’d been neutered and wore a plastic cone around his neck.

Kitty was walking faster than they’d rehearsed, her steps out of sync with the music. She’d always stood out to him among her sisters–the shortest in height, the most delicate features, the darkest hair color, the most intense way of looking at a man. Of looking at him. As if he’d never measure up to her standards.

Take now, for instance. She should have been smiling serenely. Instead, she glared at him as if he was a threat to national security.

Apprehension galloped down his spine like an angry stallion defending his fence-line.

Had the sisters argued? Was his bride having second thoughts?

Kitty ascended the altar and stopped in front of Beck. A wave of murmurs rippled through the church. She was supposed to take her place on the bottom of the altar on the far side, not a step below the groom.

“Are you in love with my sister?” she demanded in a whisper, clenching her small pink peony bouquet with a white-knuckled grip.

Something had happened. Something bad. Beck’s smile wavered.

What had Kitty asked?

Something about love. Beck’s balance wavered. Was he in love? His shoulder bumped his best man’s as he struggled to find the words to answer. “I am.” Was that his voice? Did it waver, too?

It had. He’d better not sound so unsure when it came time to say, “I do.”

Unlucky. The day was unlucky. It couldn’t end soon enough.

Beck steadied himself. He worked up enough saliva to swallow and smiled, but it felt as if he’d borrowed someone else’s lips.

More bridesmaids were marching down the aisle, taking their places without glares or interrogations.

Kitty didn’t move. “If your barn was on fire and you had to choose between that horse of yours and my sister, who would you save?”

“You’re saying she couldn’t walk out?” Beck blurted, immediately disliking his answer. He also didn’t like that people were staring at them. And he especially didn’t like Kitty.

“You don’t.” Kitty’s eyes narrowed. “Not really. Not the way you should.”

Something stuck in Beck’s throat. Something sharp and shameful.

Beck had a bad feeling, a prickle at the back of his neck like the time O’Brien’s Free Ride had pulled up lame last winter.

This was the moment his bride had dreamed of her entire life. The moment Beck had patiently been preparing to endure.

He tried to edge the short wayward bridesmaid aside.

And then disaster struck.

The Magnolia and Moonshine Series:
(Clicking on the book covers will take you to Amazon.) 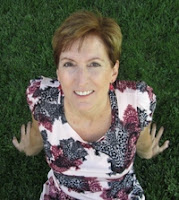 Melinda grew up on an isolated sheep ranch, where mountain lions had been seen and yet she roamed unaccompanied. Being a rather optimistic, clueless of danger, sort she took to playing "what if" games that led her to become an author.  She spends days trying to figure out new ways to say "He made her heart pound."  That might sound boring, but the challenge keeps her mentally ahead of her 3 kids and college sweetheart husband.