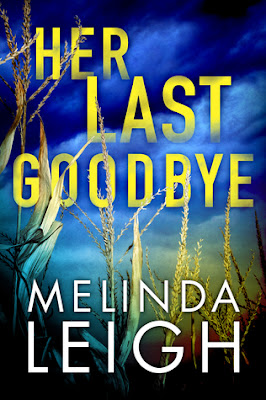 Young mother Chelsea Clark leaves the house for a girls’ night out…and vanishes. Her family knows she would never voluntarily leave her two small children. Her desperate husband—also the prime suspect—hires Morgan to find his wife and prove his innocence.

As a single mother, Morgan sympathizes with Chelsea’s family and is determined to find her. She teams up with private investigator Lance Kruger. But the deeper they dig, the deadlier their investigation gets. When Morgan is stalked by a violent predator, everything—and everyone—she holds dear is in grave danger.

Now, Morgan must track down a deranged criminal to protect her own family…but she won’t need to leave home to find him. She’s his next target.

Her Last Goodbye is the second book in Melinda Leigh’s Morgan Dane series.  Not only did I read the first book in this series, Say You’re Sorry, I have also read her Scarlet Falls series. That’s important to note because the characters all live in the same city and have some notable connections that made me feel like part of a small community.

Morgan Dane is a former prosecutor turned defense attorney.  She is a widow with three young and adorable little girls.  She just recently started to collaborate and share office space with a private investigation firm called Sharp Investigations.  Sharp is a retired cop who also employs recently retired but still young, former Scarlet Falls Police Detective Lance Krueger. The first book set the stage for a budding romantic relationship between Morgan and Lance who have known each other for years.  When Morgan gets hired to clear the name of a husband whose wife has gone missing, she stumbles upon a serial killer and finds herself in the middle of a sinister plot.  Luckily, she is not alone.  When her family gets threatened, she and Lance have to break a few rules to unravel the mystery.  In addition, they employ the help of several other people that are near and dear to them.

I appreciate the fact that although this ends up being a hunt for a serial killer, there are a lot of references to family and friends.  Morgan learns that she doesn’t have to go it alone and she realizes that she and Lance can have a real relationship in spite of her other obligations. In addition, Melinda Leigh does an excellent job of drawing you in and then pulling the wool over your eyes.  Just when you think that you have it all figured out, she throws a curveball. Once I was sucked in, I couldn’t put Her Last Goodbye down.  The suspense was intense and the list of possible suspects was long.  I truly felt like part of the investigation.  Her Last Goodbye can be read as a standalone but I think it would be more enjoyable after you read the first book.  I’m looking forward to the next book, Bones Don’t Lie.  Morgan Dane is a brave and capable attorney but she is an even better crime-solver.