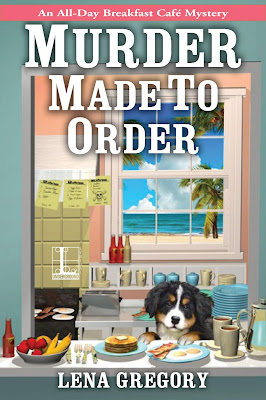 New York native Gia Morelli is just getting used to life in Florida when she gets word that the town government wants to shut down her pride and joy: the charming little diner known as the All-Day Breakfast Café. A forgotten zoning regulation means that the café was opened illegally, and hardboiled council president Marcia Steers refuses to budge. Gia is considering hanging up her apron and going back to New York, but before she gives up on her dream, she discovers something shocking in the local swamp: Marcia Steers, dead in the water. There’s a secret buried in the books at town hall, and someone killed to keep it hidden. To save her café and bring a killer to justice, Gia and her friends will have to figure out a killer’s recipe for murder …

Hi. I’m Gia Morelli. Until recently, I worked in a busy deli in the heart of Manhattan, I was married to the man of my dreams, I enjoyed spending time with my friends, and I was about as clueless as you can get. Due to circumstances beyond my control—aka, my lying, cheating, philandering ex-husband swindled who knows how many people out of millions of dollars, when he wasn’t busy hanging out with one of his numerous girlfriends—I was forced to flee New York.

Thankfully, I have the best friend in the entire world, Savannah Mills. Savannah was my roommate for a while when she lived in New York, before I met Bradley. When Bradley and I moved in together, Savannah returned to her hometown in Florida.

When Bradley was arrested and his victims started harassing me, Savannah urged me to relocate to Florida and live with her. After Bradley’s long line of lovers was paraded through the courtroom, I finally accepted her offer to help me move.

Savannah helped me set up my life long dream, the All-Day Breakfast Cafe. In keeping with the neighborhood architecture, we painted the beautiful, historic, two-story building pale yellow with white trim. Round tables of varying sizes dot the dining room, covered in navy blue cloths. Light-colored, wood chairs with homemade cushions, made by Savannah, surround them. Savannah has always been amazing at anything craft related. A skill I don’t share but admire immensely.

It fits nicely with the other shops along Main Street in the small, artsy, tourist town of Boggy Creek. Nestled a bit south of Central Florida’s Ocala National Forest, the town is known for its festivals, art and craft shows, and seasonal fairs, and I hoped my breakfast café would be the perfect addition.

And it might have been, if I hadn’t gone out the back door to put the garbage out, after an opening day that could have gone better, to say the least, and found Bradley’s arm hanging out of my dumpster. Unfortunately, the rest of him was found in there too.

And it that wasn’t enough of a rocky start to my new life in Florida, now the Town Council is trying to close down my café because of some kind of zoning error. Then I trip over the council president, Marcia Steers, while walking through the woods with Thor. All in a town where murders never occur, if the statistics Savannah spewed while trying to convince me to move can be believed.

And if all that isn’t enough, it seems Florida is home to an abundance of wildlife. I’m not talking about cute little squirrels with fluffy tails or kitty cats, either. I’m talking about alligators, snakes—poisonous ones!—and bears.

So, now I spend my days trying to keep my business afloat, while making a list in my head of all the positives and negatives of living in Florida. Someday, I’ll decide if I’m going to stay, but for now, I’m here. And I’d love for everyone to stop into the All-Day Breakfast Café and visit with Savannah and me.

Gia stepped over a large branch blocking the path through the woods, then patted her pocket—for the millionth time—to make sure her canister of bear spray was still there. Though she enjoyed their walks, which allowed her to spend time with Thor and provided both of them some much needed exercise, her nerves sometimes got the better of her. This morning was no exception.

Thor trotted happily alongside her, sometimes darting ahead, but always staying on the trail and within sight.

She didn’t have the heart to call him back, even though she wasn’t in the best mood this morning and her mind was a million miles away. Unfortunately, her hectic schedule at the café didn’t allow much time for hiking, or anything else for that matter. So she trudged on, despite wanting to go home and spend her morning curled up with a good book.

Savannah and Trevor had both insisted early morning hikes would clear her head and help her get used to living at the edge of the forest. Though they did help her focus better, they did nothing to help her embrace her new surroundings. If anything, they terrified her even more. Looking into the woods surrounding her property and not knowing what lurked just behind the tree line gave her the creeps, but hiking the local trails and actually seeing snakes, alligators, and other critters, some of which she couldn’t even identify, brought nightmares.

And yet, here she was… She’d been looking forward to hiking the new trail, but her mind was too cluttered with everything else to focus on enjoying the peaceful morning. She sucked in a shaky breath, the humidity making her chest heavy. “Don’t get too far ahead, Thor.”

The big, furry dog, who still hadn’t quite grown into his chunky paws, stopped at the sound of her voice, turned back to her, and tilted his head, then waited for her to catch up.

“Good boy.” She petted his head. “At least, you’re having a good time. You sure do love these early morning walks, don’t you?”

He dropped his tongue out and panted.

“Come on. There’s supposed to be a lake up ahead. I’ll get some water out when we get there, and we can rest for a few minutes and have a drink.” She hefted her small backpack farther onto her shoulders and started forward.

The trail was becoming more overgrown, the brush encroaching on the open space. When it forked, she hesitated. She’d looked at the map at the edge of the parking lot, but she couldn’t remember which way to head. The path to the left held less vegetation and seemed to be used more often, so she turned that way. Most likely, all the trails would converge at the lake anyway, so it probably didn’t matter.

A line of sweat trickled down the side of her face. Gia wiped it away, slid an elastic band off her wrist, and tied her hair back. Winter in Florida was a whole lot different from winter in New York. Though she’d be lying to herself if she didn’t admit she missed it. The cold bite of winter air—which would freeze her lungs when she inhaled. The beauty of snowflakes falling and blanketing the entire city in white—which would turn to black slush a few days later, leaving puddles of muck scattered wherever she tried to walk, soaking her feet and splashing from tires if she ventured too close to the street. The warmth of a cozy fire and a mug of hot chocolate on the coldest of nights—of course, it wouldn’t be the same without someone to cuddle with.

No matter how many times she went over the same arguments in her head, they didn’t change the fact she had no clue what she wanted to do. Who knew? Maybe the zoning error would prove to be a blessing in disguise, the shove she needed to return home.

But she had good friends in Boggy Creek, people who’d stood by her and accepted her. And yet when it came right down to it, she still couldn’t help feeling like a visitor. New York had always been, and would probably always be, home.

The sound of dried leaves and palm fronds crunching beneath footsteps pulled her from her indecision.

Thankfully, he obeyed the command, and she clipped his leash to his collar. He would never hurt anyone, but sometimes he got a little overenthusiastic about greeting new friends, and not everyone appreciated a strange dog, no matter how well-meaning, jumping up on them.

“Heel.” She kept him close to her side and angled herself so she’d be between him and whoever was coming toward them. 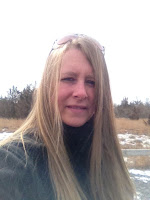 You can follow the Murder Made to Order Blog Tour here.