💞 Review ~ DANCE OF THE HEART by Lisa Kessler 💞 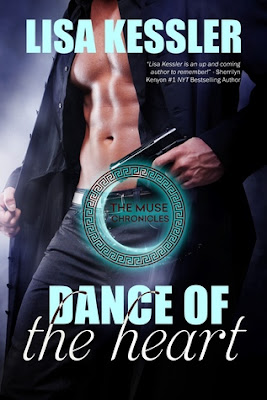 He's willing to lay down his life, to save hers...

Tera Muldoon not only runs her own dance studio, but she's also secretly the human vessel for the Muse of Dance. Having her name at the top of an immortal's hitlist isn't helping her social anxiety issues, but everything changes the day she hires a bodyguard.

Gavin Thompson is the best at what he does, and when his security company is hired to protect a dance instructor, he thinks it's business as usual. But no one warned him being with Tera would blur the lines between personal and professional interests. What started out as a job might be his only chance at a future he never dreamed possible.

They just need to live to see it.

Tensions are reaching a boiling point in the “war” between Kronos, the father of Zeus, and this generation’s reborn daughters of Zeus, known as muses. Now that Kronos has escaped Tartarus, he wants retribution on Zeus for overthrowing and imprisoning him. His way to do so is to retaliate on the human vessels of Zeus’s daughters. Prophecy states that every muse will have a guardian with abilities to protect them in their time of need.

Tera Muldoon is this generation’s Muse of Dance. She is a former ballerina who owns her own dance studio where she teaches various forms of dance from ballet to jazz. Tera is quiet and shy, and thus up until this book, readers have been left in the dark about her. As a child, she was homeschooled. Her stage mother abused her and kept her isolated from everyone and anything that wasn’t dance/ballet related. For the past three years, Tera has had a restraining order against her mother and to her knowledge she didn’t know where she was. But that is about to change.

After a knee injury changed the course of his life, Gavin Thompson has lived to serve and protect. When it’s decided Tera needs a bodyguard, Gavin is hired at the request of Nate Malone a friend and husband/guardian of the Muse of Tragic Poetry. Gavin has no problem laying his life on the line because, “My work is my life. I don’t have any loose ends. Whenever fate decides it’s my time, I won’t have any regrets.” But he also knows that he’s good enough to survive any obstacles thrown his way.

“But are you her Guardian? We’ve been waiting for him to find her.” Yes he is. Almost immediately Gavin is tested and his gift from the Gods is beyond comprehension. Gavin arrives just in time and he is everything Tera needs. “I’m not use to having an anchor in the storm.” “You have one now.” And Gavin will fight with all his strength and determination to keep Tera and the other muses safe.

Dance of the Heart is the sixth book in Lisa Kessler’s Muse Chronicles series. This is a standalone read that brings all the previous muses and couples together. The only potential spoilers are that the powers of the other guardians are mentioned and the super-villain from a previous book is still around. Personally, I would binge read the whole series. It’s simply incredible.

Lisa is truly a wonderful storyteller who has the ability to put the reader into the pages of her books. For me, the Muse Chronicles are stories that once I pick up, I forget about the rest of the world. I love the world and characters she has created. Dance of the Heart has passion and suspense. You’re left wondering how certain things are possible. There isn’t a cliffhanger so to speak, as Gavin and Tera’s story has reached its happy for now status. However, there is one more book in this amazing series that will have the final muse finding her guardian and potentially being the most explosive book in the series.

**Received a copy of the book from the author and reviewed voluntarily. Eagerly awaiting the paperback release, to personally add to my bookshelf.**

You can read an excerpt of Dance of the Heart here.

Don’t miss the exciting conclusion of The Muse Chronicles series with, Song of the Soul, book 7 coming November 5, 2018