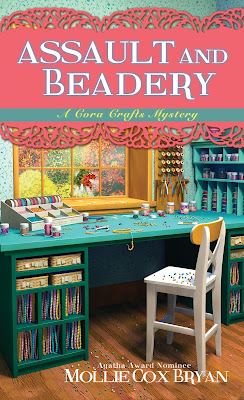 All of Cora Chevalier’s dreams are coming true. Since moving to Indigo Gap, North Carolina, the busy crafting maven has been blessed with a great boyfriend, a lovely home, and a booming craft retreat business. But on the eve of her first Crafty Mom’s Escape Weekend, tragedy strikes again in Indigo Gap. This time, it’s curtains for Stan Herald, the disagreeable director of the local theater group, who’s murdered on the opening night of their new production. Worse, Cora’s friend Zee is accused of the crime.

Cora is determined to prove her friend’s innocence, but Zee’s mysterious past is making that difficult. And with a list of suspects longer than a double spool of satin cording, getting a bead on the real culprit won’t be easy. With her friends Jane and Ruby at her side, Cora must string together the clues and solve Stan’s murder before the killer gives an encore performance.

Congratulations on Assault and Beadery, the fourth book in your Cora Crafts Mystery series. What can you tell me about the series?
The series is about three women who run a craft retreat. Different teachers come to the retreat each time, with different specialties. So through the whole series, there’s a lot of different crafting, new people, and plenty of opportunity for murder. 😉

Tell me about Cora Chevalier and the other main characters of the series.
Cora was a counselor in a women’s shelter in Pittsburgh and developed an anxiety disorder. Crafting helped her and she realized it helped some of her clients and she started blogging about it. Her dream became to open a retreat where women had a safe space to explore their creative sides.

Her best friend Jane, a single mom, is a potter and she becomes her partner in the business.

Ruby is an older woman who lives in the gardener’s cottage on the property and eventually ends up being a third partner. She’s a gifted herbalist and fits right in.

How do you come up with titles of your books?
That’s a great question. For these books, I try to use one of the featured crafts in the title. And I play with the words and come up with them that way. I submit several ideas to my editor and he and the team at Kensington choose which title to go with.

Are you a crafty person and if so, what do you make?
I’m a scrapbooker and papercrafter. I’ve made quilts, too. These days, I’m into embroidery. I love hand sewing--I find it so soothing. So when I quilt, I hand quilt, which takes a very long time. I also love upcycling. I’ve made bird feeders from cup and saucers and artist trading cards from old playing cards.

That sounds great. Can you tell me some fun facts about the book?
There’s a hilarious catering mix-up and a Bloody Mary recipe mistake. That’s all I’m saying.

That sounds both bad and really funny. Mollie, thank you so much for your time.
Thank you!

Mollie Cox Bryan is the author of the Cumberland Creek Scrapbooking mystery series and the Cora Crafts mystery series. She is also author of two cookbooks, the regional bestseller Mrs. Rowe’s Little Book of Southern Pies and Mrs. Rowe’s Restaurant Cookbook: A Lifetime of Recipes from the Shenandoah Valley. An award-winning journalist and poet, she currently blogs, cooks, and scrapbooks in the Shenandoah Valley of Virginia with her husband and two daughters. Scrapbook of Secrets was nominated for an Agatha Award for Best First Novel.

You can follow the Assault and Beadery Blog Tour here.