Review ~ WITCHIN' YOU'RE A DRAGON by Isabel Micheals 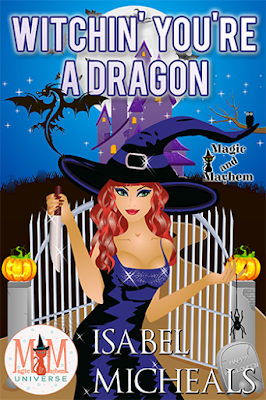 Sarah Abrams is on the run from a Dark Warlock who wants her secret power. A secret power she's never divulged to anyone. But, the more she suppresses her true nature, the weaker her secret power becomes. When she's cornered by the Dark Warlock in Sin City, it'll take the power and ingenuity of a red dragon and his friends to help her escape.

Cole wasn't sure what drew him toward the damsel in distress, but everything in his being told him to protect her. When he's confronted by the Dark Warlock's hellhounds, he's left with only two choices. Let his dragon fly free and create more havoc on Sin City, or call in backup.

Either way, all hell is about to break loose again, when a feisty damsel in distress hiding her powers and an out-of-control, fire-breathing dragon hiding from a leotard wearing warlock find themselves surrounded by Dark Magic. Who knew sequins were flammable?

I fell in love with Cole in Witch ‘N Fire, and was excited to have him get his own story. Cole is the best friend of Zara, the third triplet of Fabio and the Spawn from Satan, as she’s called. Zara and her sisters are supposed to be three of the most powerful witches so they generally always have someone trying to take their powers.

Cole finds himself stumbling upon a kidnapping. But things are not as they appear. Cole soon discovers dark magic is involved and implores Sarah to allow him and the rest of his family to help. Sarah eventually agrees and in the process makes some new and startling discoveries about herself and what she’s always believed. In order to get to the bottom of Sarah’s situation, it’s going to take the community of witches and shifters to band together.

Told in third person, Witchin’ You’re a Dragon is a quick, standalone read. Isabel continues to write fun, over the top characters with antics galore. This was a fun read with quite a few surprises and tons of laugh out loud moments. I’m excited that there’s going to be another book and I can’t wait to see how it plays out.