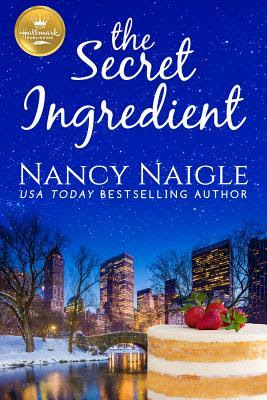 Love is like a perfect recipe… You never want to lose it.

Years ago, Kelly McIntyre and Andrew York were engaged and dreaming of opening a restaurant together. Then he chose an opportunity to study in Paris over the small-town life they’d planned, and their romance came to a bittersweet end.

But Kelly’s doing fine. She’s not only the owner of a potbellied pig named Gray, but also of her own bakery. Business is good—so good that she’s invited to compete in a Valentine’s Day bake-off. As she prepares for the contest, she tries not to get distracted by Andrew’s visit to town.

When Andrew sees Kelly, it stirs up his old feelings. Little does he know that soon, in New York, he’ll compete against her in the bake-off…and they’ll both realize how much their past is a part of them still.

The Secret Ingredient by Nancy Naigle is the first Hallmark book I’ve read. I love watching the movies and I could totally picture everything playing out on the small screen.

As young adults, Kelly McIntyre and Andrew York had their lives planned out. They would get married, live in their small hometown of Bailey’s Fork, North Carolina and open their own restaurant. Kelly and Andrew loved creating new recipes together. Kelly would be the baker and Andrew would be the chef. Their dream got a little side-tracked when Andrew was offered a once in a lifetime opportunity to study pastry under one of the world’s best pastry chefs in Paris. This little life detour took their lives in a whole new direction when Andrew was offered a full scholarship and asked Kelly to join him in Paris. Not wanting to leave Bailey’s Fork and abandon the dreams they once shared, Kelly breaks up with Andrew.

Fast forward seven years and Andrew has finally returned home to visit his family before he embarks on an opportunity that could change his life yet again. Andrew is working for and running one of the top restaurants in Paris for his mentor, while Kelly has fulfilled her dream and opened her own successful bakery. The two reconnect and are surprised to find their attraction to each other is as strong as ever.

It’s soon revealed why Andrew actually came back to the United States. He is supposed to appear on the Four Square Cooking Show, a baking competition where the identities of the contestants are kept secret from everyone, including the contestants. Not only is Andrew competing in this contest, but so is Kelly. As the two compete, you’re witness to seeing just how compatible these two really are. “If it was real love all those years ago, it’s still there.” For Andrew and Kelly, this Valentine’s Day competition will show them that love knows no time nor distance.

The Secret Ingredient was like a perfectly delicious constructed cake. The characters of Kelly and Andrew were very likeable. As were the secondary characters. This was a sweet story that left nothing out. Bailey’s Fork sounded like a town I would love to visit. Of course, the culinary creations created by Kelly and Andrew made me hungry. The love these two had for each other shined through the pages. Be prepared to shed some tears. I know I did.