Review ~ A DARK AND TWISTING PATH by Julia Buckley 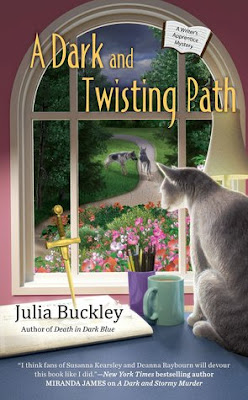 Writer's apprentice Lena London is happily working on a new collaboration with her idol and bestselling suspense novelist and friend Camilla Graham, but her joy is short-lived when a dark cloud descends upon the quaint town of Blue Lake, Indiana...

Lena's best friend, Allison, is in a panic. On a walk in the woods by her home, Allison discovers the body of her mail carrier, an argumentative man who recently had a falling out with Allison's husband. Lena quickly realizes that Allison has nothing to worry about as the murder weapon points to a different suspect altogether: Lena's embattled boyfriend, Sam West.

Sam was cleared of his wife's murder when she was found alive, and now someone is trying to make him look guilty again. Surveillance video of a break-in at his house shows a shadowy figure trying to incriminate him by stealing the weapon from his desk. Lena and Camilla work on a suspect list, but a threatening note and a violent intrusion at Graham House prove that the devious killer has decided to write them into the plot.

“Blue Lake is just a quiet little town. What possible secrets could people be hiding here?” When Lena London’s best friend Allison finds her mailman, Eddie Stacks, dead in her backyard, Lena and her mentor mystery writer Camilla Graham get to work to solve a murder and catch a killer. They will soon realize everyone in Blue Lake has secrets.

Once again, Julia Buckley has captured my attention and held it until the very end. A Dark and Twisting Path finds Sam West still having to deal with the police. However, this time he's not being looked at as a suspect but as a victim. In yet another attempt to frame him, Sam's house is broken into and his letter opener is thought to be what killed Eddie. Camilla and Lena's home is also broken into, with seemingly nothing stolen. It seems Sam and Lena are still being targeted but by who and why?

A Dark and Twisting Path is the perfect title for this book. Julia has written another page turner, with an incredible storyline and amazing characters. There are twists, turns, and surprises you will not see coming. This is the third book in the series, but unfortunately not a standalone read. Each book has its own self-contained mystery but there is also a series arc which spans the three books. If you are new to this series, I strongly suggest you read at least the second book, Death in Dark Blue, to understand all the characters in play. With that said, I can’t wait for the next book in this series.