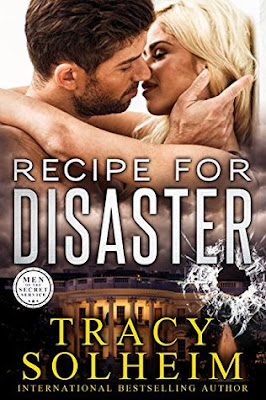 Secret Service Agent Griffin Keller always gets his man. And, his woman. In pursuit of an international counterfeiter known only as "The Artist", Griffin stumbles across paintings that have been unknowingly stolen from the White House and swapped with forgeries. His only clue to the thief's identity, a dish towel from the White House kitchen.

White House pastry chef Marin Chevalier desperately needs a date to her cousin's society wedding. Unfortunately, her busy schedule and lackluster social life leave her little opportunity to meet eligible men. When a sexy Secret Service agent shows up in her kitchen—and just about everywhere else she goes—Marin believes she's finally met the perfect date. But as a series of frightening accidents and near misses begin to occur around her, Marin finds herself relying on Griffin as more than just her "plus-one".

The more dead bodies that pile up around Marin, the more Griffin is convinced she is the link to The Artist. Too bad he can't convince his libido. The curvy chef has gotten under his skin like no other woman. When the clues finally fall into place and Griffin realizes Marin is not the suspect, but instead the target, he'll risk everything in his arsenal to keep her safe. Even his heart.

It's been awhile since I read a true romantic suspense. Recipe for Disaster by Tracy Solheim reminded me why I love the genre.

For the past two years, Secret Service Agent Griffin Keller has been on the hunt for “The Artist”, an international counterfeiter who has been flooding the world economy with fake hundred dollar bills. Just when he thinks he finally has “The Artist” or one of his associates, that person is killed. Griffin's investigation is turned upside down when it's discovered that “The Artist” isn't only dabbling in counterfeit currency but also in famous artwork. The kind that looks too good to be a forgery and should be hanging on the walls of the White House.

Griffin’s investigation takes him to the White House and namely to the pastry kitchen, where he encounters Marin Chevalier. Marin is one of the newest members of the White House kitchen staff. She’s the head pastry chef, a hotel heiress, and the god-daughter of the First Lady.

While Griffin is attempting to figure out if Marin is a viable suspect, he can’t deny he finds her charming and attractive. Soon, bodies start to pile up and Marin quickly goes from potential suspect to victim. Now, the question becomes why is someone out to kill Marin. Is it because of who her grandfather is or because she knows something about the art thefts?

I loved Recipe for Disaster. Tracy immediately drew me into the story. There was never a dull moment. Tracy has written a story with murder and intrigue. There were twists and turns I didn’t expect. Just when I thought I figured out what was going on, I realized there was more. The main characters of Griffin and Marin were easy to like. The secondary characters of Griffin’s best friends and fellow agents of Ben and Adam were also great, adding humor and more credence to the the allure of Secret Service Agents.

**Received a copy of the book from the author and also purchased a copy personally.**

You can read my Recipe for Disaster interview with Tracy here.

The Men of the Secret Service Series:

After years of writing reports and testimony for Congress, Tracy Solheim decided to put her creative talents to better use. A two-time finalist for the Maggie Award for Excellence, she’s the international best-selling author of contemporary sports romance, romantic suspense, and small-town second chance stories. Tracy lives in the heart of SEC country, also known as the suburbs of Atlanta, with her husband, two adult children who frequently show up at dinner time, and a Labrador retriever who thinks she’s a cat. She currently serves as the vice president of programing for the Georgia Romance Writers. When she’s not working out with friends (i.e. lifting heavy bottles of wine), she’s writing. Except for when she’s reading, but according to her, that’s just necessary research.