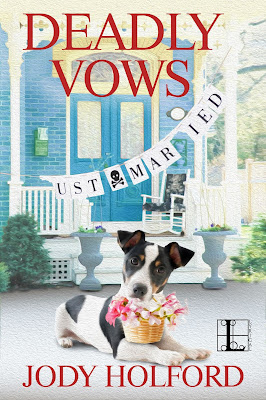 Former Army brat Molly Owens is happily settling into her new life in the seaside town of Britton Bay—and into new her job as editor-in-chief of the local paper. But as tourists discover the desirable spot, the tide along the Oregon Coast is turning...

Britton Bay is buzzing with preparations for a wedding at the bed and breakfast where Molly rents a small carriage home. Molly is even helping out and plans to interview the rising star caterer—until the woman is found dead. And then the bride-to-be goes missing. To make matters worse, the venue is owned by Molly’s new boyfriend’s mother—and Molly was among the last people to see the victim alive. All of which makes solving the crime her top priority...

With the nuptials indefinitely on hold, Molly will have to sift through a sticky mix of suspects, including a rival caterer with a short fuse, a groom with an illicit secret, and a wedding party riddled with personal drama. And if she doesn’t discover the truth soon, Molly might be her own front-page news...

Jody Holford’s Britton Bay Mystery series is fastly becoming one of my favorite cozy mystery series. She combines romance and mystery together, and makes you want to turn the page to see what happens next.

Deadly Vows finds the small town of Britton Bay, Oregon all abuzz with the wedding of a former resident’s daughter. Patricia Lovenly wants nothing but the best for her daughter Chantel’s wedding. She’s rented out the Bed-and-Breakfast of Katherine Alderich to host the wedding as well as all the wedding party. For Patricia, none of the restaurants or local businesses are good enough to feed the wedding party or guests. She has brought in her own celebrity chef, Skyler Friessen, to see to all the food, including the wedding cake. Skyler is very particular about any and all food coming into and out of her kitchen. She comes across as rude, demanding, and unfriendly.

As the week long events leading up the the weekend wedding get under way, tensions start to rise. Molly Owens, editor of the the Brittan Bay Bulletin, finally figures out a way to get Chef Friessen to agree to being interviewed. Just as Molly is making her way to the chef’s hotel room, she discovers the chef is dead and police are thinking it was murder. Molly’s thirst for information has her looking into who would want to kill the out-of-town chef and why.

I love all the main and secondary characters Jody has created for this series. Molly is a twenty-eight-year-old who is still trying to figure out where she belongs. She arrived in Britton Bay shortly after discovering her ex had been cheating on her. Growing up with an Army father didn’t provide her with a sense of roots, so she’s accustomed to moving around a lot. Molly has been in Britton Bay for almost three months. She’s starting to wonder if it’s time she moved on and if she can truly trust her growing feelings for her new boyfriend Sam.

I love the blossoming romance developing between Molly and Sam. I’m looking forward to seeing where their relationship goes. I also like the possible relationship that seems to be developing between Katherine and the Police Chief. The mystery of who killed Skyler was easy and straightforward. However, that’s not to say there aren’t secrets to uncover. There are definitely secrets, some more surprising than others. Deadly Vows proved to be a really good read. I can’t wait for the next book in this series.