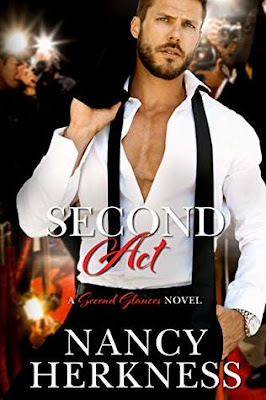 Jessica Quillen, veterinarian for the charitable K-9 Angelz program, didn’t mean to stumble into the middle of a New York movie shoot. She just wanted to rescue the stray dog she’d been chasing. Instead, she’s playing catch-up with her ex-fiancé—and the screen’s hottest action hero, Hugh Baker. The only man she ever loved. The dream that disappeared. The heartthrob who’s now hoping for a “take two.”

Seeing Jessica triggers emotions Hugh has tried to forget. Abandoned by his mother to foster care, he still struggles to feel worthy of love and to open his heart to a woman. His biggest mistake was not trusting Jessica. It was his fault she left. All he wants now is to make up for lost time. But he has to prove that she can trust him.

Though the sparks still smolder, he’s still Hollywood—a world far away from Jessica’s. Now it’s up to her to give their love story a happily ever after.

I must admit, I went into reading Second Act cold. In recent years, I've become a fan of Nancy Herkness and I know she's guaranteed to give me a story I will like, if not love. Subsequently, when I started reading Second Act I had no idea what the story was about. I just knew the story would be a second chance romance.

The beauty of second chance romances is that generally, at least a few years have passed since the initial breakup. During that time, the couple has had the opportunity to grow and mature as individuals. They're able to gain new insight and perspective into the relationship. If the couple is truly honest with themselves, they can see what part they played in the deterioration of the relationship.

A chance encounter brings Jessica Quillen and Hugh Baker face-to-face eight years after going their separate ways. Before the breakup, Jess was a new veterinarian and Hugh had just landed the role of a lifetime. A role which would make him a household name all around the world and richer beyond his dreams. The pressure of Hollywood with having to dress just right, act just right, attend the right parties and social gatherings, and say the right things took a toll. Not wanting to dull his star, Jess ended their engagement. While she wanted to remain friends, Hugh cut her out of his life. But not out of his heart and mind. While he is in New York, filming the latest Julian Best film, he wants to hang out and reconnect with Jess. Against her better judgment she agrees. One secret rendezvous turns into two which turns into a whole lot more. They soon realize their attraction is stronger than ever. But the pressure of Hollywood before is nothing compared to the pressure it possesses now.

Hugh is a hero who has used his tragic upbringing to propel him into superstardom, where he's loved and adored around the world. He embodies his superspy persona in that he doesn't allow anyone to see who he really is. Even though he was once engaged to Jess, he never fully revealed his scars. Jess is an Iowan who has an unending, unwavering dedication to her clients. She isn't a person who is impressed with wealth and privilege. She loves what she does, even if she works long hours, isn't paid very well, and sometimes doesn't get paid at all. While running her vet clinic keeps her busy, she still finds time to work with the Carver Center and its K-9 Angelz program. The Carver Center is an after-school facility that caters to disadvantaged children in a South Harlem neighborhood. The K-9 program allows the kids who normally wouldn't be able to have a dog get one from a shelter and care for it at the center.

Hugh and Jess are two people who show what time, distance, and perspective can do for a relationship. They've learned from the past. Hugh has scars that are extremely deep. He has fears he doesn't even know he has. Jess is a healer. She’s not a woman who wants to change Hugh. She just wants to support him anyway she can, without losing who she is. I love their dedication and love for kids and animals. But more importantly, their love for each other. They each have so many layers between them. I loved watching them together. Second Act will definitely tug at your heartstrings, there may even be a tear or two.

Second Act is the third and final book in the Second Glances series. It is a standalone read and brings back characters from The VIP Doubles Down, which is part of the Wager of Hearts series. I am so so sad to see this series end. I've really enjoyed getting to know the kids at the Carver Center and the dogs that are a part of the K-9 Angelz program. I really hope to see the characters of the series again one day. More importantly, I hope Dr. Ben Cavill gets a story.

Second to None ~ Review
Second Time Around ~ Review

Nancy Herkness is the award-winning author of the Second Glances, Wager of Hearts, and Whisper Horse series, published by Montlake Romance, as well as several other contemporary romance novels. She is a two-time nominee for the Romance Writers of America RITA® award.

A member of Romance Writers of America, New Jersey Romance Writers, and Novelists, Inc., Nancy has received many honors for her work, including the Book Buyers Best “Top Pick” Award, the New England Readers’ Choice award, and the National Excellence in Romance Fiction Award.

Nancy graduated from Princeton University where she majored in English. In addition to her academic work in literature, she was accepted into Princeton’s creative writing program, and her senior thesis was a volume of original poetry.

After graduating, Nancy had a varied career which included retail management and buying, COBOL programming, computer systems sales and marketing, and a brief stint as a receptionist at a dental office. Once her children were in school full-time, she sat down and wrote A Bridge to Love, her first romance novel to be published.

Nancy finds nothing odd about writing in the genre she calls the “Rodney Dangerfield of the literary world. It gets no respect.” She explains: “I was trained as a poet, but from the day my grandmother gave me my first Georgette Heyer novel I wanted to write romance. Romance is the genre of optimism, and that’s why I like it.”