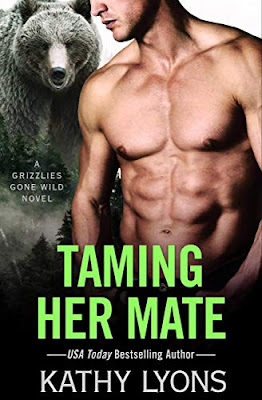 Some men aren't meant to be tamed in the next book in USA Today bestselling author Kathy Lyons's Grizzlies Gone Wild series!

Detective Ryan Kennedy doesn't have time for distractions. As the only bear shifter on the police force, he's responsible for investigating the cause of the mysterious flu-like illness that's ravaging the citizens of Detroit. But when the beautiful daughter of a rival clan's alpha asks for his help, Ryan realizes that she may hold the key to stopping the virus. If only he can focus on the case and not on how much he wants to kiss the enemy.

Francesca Wolf knows who's poisoning the city, and she has a plan to take him down, but it will only work if Ryan follows her lead. Frankie's strong, passionate spirit makes her slow to ask for help, but time is running out and the sexy-as-sin cop won't submit to her demands. Instead, he's giving her orders and firing up her passions just when she needs to stay calm. They'll have to work together-as equals-to save the city, to keep each other alive, and to contain a hunger that might just burn the whole city to the ground.

Taming Her Mate is the sixth and final book in Kathy Lyon’s Grizzlies Gone Wild series. While it isn’t necessary to read the whole series, it is necessary to read books four and five (Alpha Unleashed and Bound to the Bear) first. The first three books in the series (The Bear Who Loved Me, License to Shift and For the Bear’s Eyes Only) take place in and around Gladwin, Michigan and the Gladwin State Park. The books are lite, taking place in a setting you want to be in. On the flip side, books four through six are dark, gritty, more violent and take place in Detroit, Michigan. Originally the series was only supposed to be three books. Thus, books one through three have endings for their individual couples, with a story arc playing out over the three books. Books four through six are in essence a new series that I like to call Phase Two. Again, the individual couples have their own endings and there is also a story arc playing out over the course of the three books.

Phase Two takes place in Detroit where people are becoming sick and some are even dying. Some people have become disfigured and have turned into monsters. The CDC has dubbed the illness the Detroit Flu. The city has been quarantined, left to fend for itself, with no one coming in or getting out. The bear shifter clan known as the Griz under their new alpha has figured out how people in the city are being poisoned. They even know their rivals are behind it. What they don’t know is where the poison is being stored or how to truly stop them.

Detective Ryan Kennedy is a bear shifter and the only shifter on the Detroit police force. He’s been working tirelessly for the past week, with little to no sleep, trying to end the poisoning and get the city back to normal. Ryan has been betrayed by everyone in his life. In fact, within the last week, he was almost killed by his former alpha. Ryan has lost the ability to trust anyone and with humans not knowing about shifters, Ryan finds himself in the sewers below the city alone, chasing two wolf shifters.

Francesca “Frankie” Wolf knows who is ultimately behind the poisoning in Detroit that has made people sick, turned some shifters into hybrids (half human, half shifter) and made full shifters stronger and more aggressive. She has a plan to end the poisoning and get the city back to normal. She just needs help to do so. When she stumbles upon Ryan in the sewer, she knows he’s a good man and that he alone is the only person who can help her. When she realizes he’s dying she knows she has to save him. But to do so, she must turn to the Griz clan, the sworn enemy of her Wolf pack, and hope they believe her.

Together, Frankie and Ryan battle to save the city and bring those involved to justice. In the process, they discover the attraction between them is too strong to be ignored. The two risk being cast out of their groups because of their crossbreed involvement. These two are simply amazing. Frankie is all heart and passion. She’s a fighter, who’s tough as nails, but prefers to use her head instead of her fists. She prefers to see the good in people and is always thinking of others before herself. Ryan simply longs to be accepted and loved for who he is. He is driven to serve and protect every single person and shifter.

At times, I found Taming Her Mate to be a little slow. There were moments where I lost interest in the story. But I can not deny that the story is well written. This completes Phase Two with a nice little bow on top. But don’t be fooled. This was a gritty, violent, and heartbreaking story. It would have been nice to see more interaction between all the shifters in Detroit after the fallout.

Kathy Lyons is the fun, contemporary side of USA TODAY bestselling author Jade Lee. She loves sassy romance with lots of laughter and sex. Spice is the variety of life, right? Okay, so maybe two kids, two cats, two pen names, and writing over 50 books has messed with her mind, but she still keeps having fun.

Or hang out with her sexy historical half, Jade Lee. Titled heroes with dark secrets are Jade's passion. Especially when they fall for women who add more than just spice to their lives.