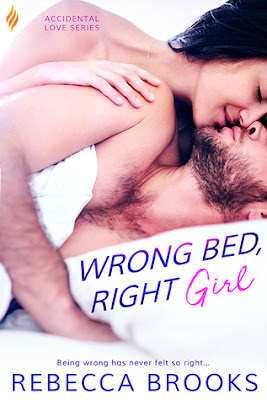 Being wrong has never felt so right...

Falling head-first into the wrong woman’s bed was not how Reed Bishop’s night was supposed to go. Now a gorgeous, half-naked ballet dancer was threatening his manhood…with a book. He can’t blame her.
It wasn’t how it seemed—he was just doing his job, tracking down his lead informant, who, unfortunately, took off, leaving him to figure out what to do with her friend. Staying in her apartment was no longer safe.
And that’s how he got himself into this mess.

Now she’s sleeping in his bed while he tosses and turns on the couch.
There are pink tights in his bathroom.
Pointe shoes next to his boots.
He swears he won’t touch her like that…but he can’t ignore his fantasies.

As a tattooed, muscled DEA Agent, Reed’s seen some things. Drug dealers, murderers…He can’t let Talia get close. Even though she’s made it clear they’re both fighting the same hunger. And he definitely can’t use his handcuffs on her…no matter how much she begs.

One day, I will learn to not doubt authors. Wrong Bed, Right Girl is the second book in Rebecca Brooks’s Accidental Love series. I thought the first book, Wrong Bed, Right Roommate was perfect. I couldn't fathom how Rebecca could pull off another wrong bed book but she did.

In Wrong Bed, Right Girl, Talia Lassiter finds herself the principal ballerina of the New York City Ballet, after the original principal had to leave unexpectedly for a family emergency. With Stacey having to leave so quickly, she offers to allow Talia to sublease her small, cramped studio apartment. Reed Bishop is a DEA agent gunning for the position of lieutenant. To do so, he must crack the case of several pharmacy robberies, including one where someone was killed. He finally has someone he thinks is a reliable informant in Stacey Moss. When Reed doesn’t hear from Stacey, he goes to her apartment to check on her, fearing her association with him has been discovered. In the darkness of the apartment, Reed trips over a box and finds himself falling on top of Talia.

When the dust settles, Reed realizes Stacey had to have skipped town because she was afraid. Reed knows the guy he's after is dangerous and that Talia being in Stacey's apartment puts her in danger. Since it's the middle of the night, Reed offers to let Talia stay at his apartment, until she can find somewhere else to stay or until he can find some place for her.

What starts out as an offer to stay at his place for a night or maybe a week turns into so much more. Talia is the first woman Reed has truly been interested in since his fiance left him. He loves his job and doesn’t want to give it up. For this reason, he thinks “I’m not a good guy to be around.” Talia isn't anything like Reed expected. She's loud, bold, independent. She says what she thinks. She has a heart of gold and a small devilish streak, “She was going to make this uptight man lose control if it was the last thing she did.” That she does and then some. On paper, Reed and Talia don't make sense. Reed’s guarded and reserved. He's all business and hardly ever smiles. Talia is smart, funny, and engaging. Their differences are what make them so perfect for each other. How can I forget about the chemistry between these two? Talia and Reed are hawt together! Anyone within arm's length of these two risks getting burned.

Prepare yourself to fall in love with these two, as they get to know each other and realize that sometimes being in the wrong place is actually the right place to be.