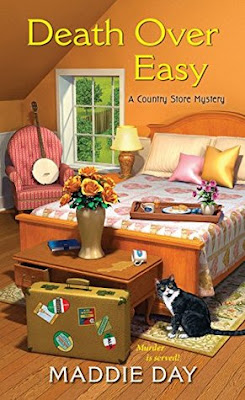 Restaurateur Robbie Jordan is ready for the boost in business a local music festival brings to South Lick, Indiana, but the beloved event strikes a sour note when one of the musicians is murdered...

June’s annual Bill Monroe Bluegrass Festival in neighboring Beanblossom is always a hit for Robbie’s country store and café, Pans ‘N Pancakes. This year, Robbie is even more excited, because she’s launching a new bed and breakfast above her shop. A few festival musicians will be among Robbie’s first guests, along with her father, Roberto, and his wife, Maria. But the celebration is cut short when a performer is found choked to death by a banjo string. Now all the banjo players are featured in a different kind of lineup. To clear their names, Robbie must pair up with an unexpected partner to pick at the clues and find the plucky killer before he can conduct an encore performance...

Death Over Easy is the fifth book in the Country Store Mystery series by Maddie Day. I love that this is a stand-alone read. Maddie does a nice job of filling in the blanks for anyone who hasn't read the series before.

Death Over Easy finds Robbie Jordan's Italian father, Roberto Fracasso, whom she recently connected with and his wife Maria visiting her in South Lick, Indiana. Their visit just so happens to coincide with the Bluegrass Music Festival. This is also the first time Robbie has opened up her bed and breakfast to guests. The three rooms are conveniently located above Pans 'N Pancakes, Robbie’s restaurant/store. In addition to her father and his wife, Beth Ferguson and her partner Ed Molina are renting a room. The third room is being rented by Chase Broward, a local councillor who has ambitions of running for Senate.

Things seem to be going smoothly until everyone is out for the first night of the festival. Abe O’Neill, Robbie's boyfriend, gets into the very public argument with Pia Bianchi, a singer and student at the local college. Pia seems to have a knack for being rude and rubbing people the wrong way. She also seems to be a user and manipulator. Pia convinces Sue Berry, the lady in charge of the festival, that they are friends and gets Sue to loan her a large sum of money that Pia refuses to pay back. In a strange coincidence, it turns out Roberto and Maria know Pia’s family back in Italy. When Pia’s body is discovered, Robbie can't help but wonder who would have killed Pia and why. It seems the suspect list is pretty long. Unfortunately, Pia’s life isn’t the only one to end in this installment of the Country Store Mystery series. A beloved member of the community is also killed. Questions about who and why continue to mount and before Robbie knows it, she and the people she loves are in danger.

Maddie Day has once again written a good mystery with Death Over Easy. I love returning to South Lick and spending time with Robbie, her friends, and family. If I'm being honest, I figured out part of the whodunit but I kept questioning myself. There is a stunning development that I didn’t see coming. I cannot wait to return to South Lick. Oh, and since Robbie owns Pans 'N Pancakes you can be sure to find some tasty recipes in the back of the book.