Review ~ HOW TO LOSE A FIANCE by Stefanie London 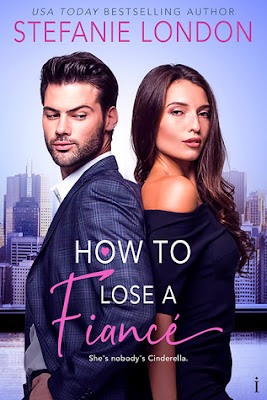 Sophia Andreou has always been the “good daughter” who tried to keep her domineering father happy. She followed the rules and did everything that was asked of her. But this time, her father is asking too much. The family company is crumbling, and her father has arranged a marriage to a Greek billionaire who can save their property business. What?! Umm no thank you. If Cinderella can dress up to win a prince, surely Sophia can do the opposite and ditch hers...

Dion Kourakis has come a long way from being an orphan with only a single friend to his name. Now he runs a billion-dollar investment company and has the respect of everyone in Europe. His charming personality covers a lot of emotional scars, including his desire to make his mentor proud. Dion doesn’t exactly want a bride to go along with his next business deal, and he plans on letting the lass down gently when they meet...

Only, his future bride has turned out to be nothing like what he thought she’d be. She’s quirky and has a habit of turning up to social events in strange outfits. It doesn’t take a genius to figure out what she’s up to, but the harder she tries to convince him she’d be an awful wife, the more he wants to convince her they’d be perfect together.

I thought How to Lose a Fiancé was going to be a romantic comedy. There are definitely funny moments, especially in the beginning. But the book quickly turns into something more. Something deeper.

Dion Kourakis and Sophia Andreou are characters you can't help but respect and love. Dion made something of himself from nothing. Seriously, he spent his entire childhood in an orphanage. Sophia has been emotionally and mentally abused by her father since she was a child. He even forces her to marry Dion as part of the condition to selling his company. Then insists she digs up dirt on Dion, in order to get a divorce and the company back.

Sophia and Dion are so much alike, with similar experiences. Together, they grow as people. When they let their walls down, they love openly. Even though they aren't actually sure what love is.

I've been on a Harlequin Desire reading kick lately. For me, this has that same feeling, only much longer.

Stefanie London is the USA Today bestselling author of contemporary romance and romantic comedy. Originally from Australia, she now lives in Toronto with her very own hero and is currently in the process of doing her best to travel the world. She frequently indulges in her passions for good coffee, lipstick, romance novels and anything zombie-related.