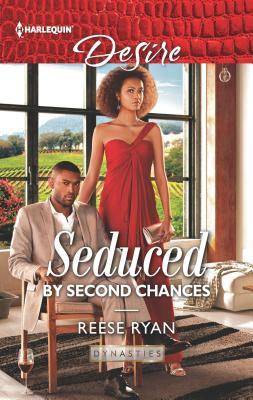 Gideon Johns inspired singer Jessie Humphrey to write her first hit about unrequited love. So when a star-studded event brings Jessie face-to-face with her former crush, sparks fly. But the handsome-as-ever real estate billionaire is still her sister’s ex. Still off-limits. Still impossible to resist. Is she setting herself up for more heartache, or for her wildest fantasy come true?

If you're looking for a drama-filled romance book then Seduced by Second Chances has your name written all over it. This is the third book in the Dynasties: Secrets of the A-List series. The series consists of four books, written by four different authors. Each book has its own hero and heroine with their own complete story. However, there is a bonus couple in the first three books who have the fourth book all to themselves. There is also a mystery arc that plays out over the course of the series. If you plan on reading Seduced by Second Chances and are only interested in a romance then this is a standalone read. If you want to follow along with the mystery, then you need to read Tempted by Scandal by Karen Booth and Taken by Storm by Cat Schield first. This series is like Dynasty and Dallas on speed. It's soooo good.

Gideon Jones and Jessie Humphrey have a history going back more than 15 years. Gideon is Jessie’s older sister Geneva's ex-boyfriend. In fact, it was Gideon's failed relationship with Geneva that pushed him to become a successful billionaire real-estate mogul. Jessie's unrequited love of Gideon has turned her into a talented songwriter and singer, whose heartbreakingly soulful songs of love and loss have made her a superstar.

The fifth anniversary celebration of Richmond Industries brings these two together in Napa Valley. Matt Richmond is a friend of Gideon’s and during the event Gideon hopes to get Matt to agree to go into a business deal with him. Jessie is one of Matt’s favorite singers and he is beyond excited she has agreed to perform at the event after the previously scheduled one ended in disaster. Jessie’s career is at a crossroads and she actually hopes to connect with a couple of people in attendance at the event. The story of Gideon and Jessie was really good. My only issue is that it seemed too clean. The biggest obstacle for them is that he is her sister’s ex. Surprisingly, there was no drama there. The storyline was set up as if there would be, but there wasn’t any at all.

As mentioned, there is another couple featured in this story. Teresa St. Claire is an event planner and Liam Christopher is a businessman. The two have a history that readers first become aware of in Tempted by Scandal. This couple has an on-again-off-again relationship that is clouded by trust issues. I really liked that Reese stayed true to this couple in the same way they were originally introduced by Karen. This series centers around this couple and all the drama deals with them. I felt the drama and mystery was missing in Taken by Storm but Reese brought it back with a vengeance. I cannot wait for Redeemed by Passion by Joss Wood. I haven't read her before but I am really expecting a great read and to be blown away.