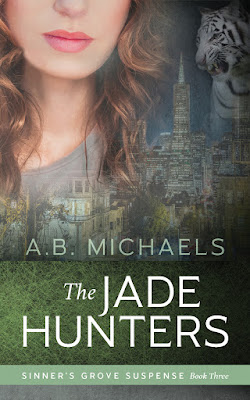 A Fortune in Stolen Jewels, a Centuries-old Vendetta: Let the Shell Game Begin.

Award-winning jewelry designer Regina Firestone is proud to exhibit her famous grandmother’s multi-million dollar “bauble” collection at the grand re-opening of The Grove Center for American Art, known among the locals as “Sinner’s Grove.”

The fact that she’s considering modeling the jewels in the nude like her grandmother did infuriates photographer Walker Banks, a co-owner of The Grove who’s in charge of the exhibit. Neither is willing to admit the real reason for the sparks between them.

Their argument takes a back seat when Reggie discovers that one of the most compelling pieces in the collection is not at all what it seems. Tracking down the truth will take the couple into the dark heart of a quest that’s lasted more than a century, one in which destroying human lives—including Reggie’s and Walker’s—means nothing in the pursuit of a twisted sense of justice.

I like the idea of you having a historical series, which has spun your contemporary series. So let’s start off with you telling me about your historical series, The Golden City.
I actually began writing the contemporary series first, basing it on an artists’ retreat I dreamed up in western Marin County, north of San Francisco. I wanted to create a history of the place, so I imagined it was started by a wealthy man who gets involved with an artist at the turn of the twentieth century. The relationship between Gus and Lia became the core of The Art of Love, which starts the historical series. The next book, The Depth of Beauty, concerns Will Firestone, Gus’s business partner, and the next three books continue the story in that time period, which was America’s Gilded Age.

Can you tell me how the contemporary romantic suspense series, “Sinner’s Grove Suspense,” is related to The Golden City series?
“Sinner’s Grove” is the nickname that locals in the early nineteenth century gave to the place that eventually became the artists’ retreat in The Golden City series. (How the retreat’s location got that name will be revealed in a future novella). So, the characters in the historical series have children from former and current marriages. Those children have children, so that by the time the contemporary series begins, there are descendants located around the country that are brought together to re-open the artists’ retreat. Sounds complicated, but if you read both series, you get to know more about various characters as time moves along.

Do you find it to be difficult at times to toggle between two different genres, with related or connected characters?
Yes and no. Yes to the degree that the different genres—historical fiction and contemporary romantic suspense—require different elements. I use real historical events to help structure my historical novels, because the drama of those events already exists. But I have to create my own tension (through bad guys and high-stakes situations) in the contemporaries. In terms of characters, however, it’s easier, because I already know the backgrounds of many of them—at least I know who their ancestors were! And it’s wonderful to be able to re-visit characters from previous books because I’ve gotten to know them, and I hate to simply let them go.

What’s your approach to writing? Do you take the same approach regardless of whether you’re writing a historical romance suspense or a contemporary romantic suspense?
My approach is slightly different because the romantic elements of the story must be more pronounced in the contemporary series. The historical fiction genre (which is different from historical romance) doesn’t require as much emphasis. Other than that, however, I approach each story in a similar way: first determining who my characters are and how they’re going to react to the situations I place them into.

Your latest book is the contemporary romantic suspense The Jade Hunters. What can you tell me about it?
This novel has a little bit of everything. I was able to incorporate some interesting aspects of Chinese history into it as well as modern jewelry-making techniques and a glimpse into how the Deep Web works. I also put some of my particular foibles into the story!

Tell me about the characters of Regina Firestone and Walker Banks.
Regina Firestone is the youngest granddaughter of Amanda Firestone, who was the lead character in The Depth of Beauty. Reggie is the spitting image of Mandy, which is to say, she’s beautiful, but like her grandmother, she’s not concerned with her physical appearance. She also has some quirks that make her quite relatable! Walker Banks is a distant relative of the artist retreat’s founder, August Wolff. Like Reggie, Walker is unassuming; most people don’t realize how wealthy he is. Another thing he and Reggie have in common is their stubbornness; when they first meet, sparks fly because each thinks the other has the wrong approach to the museum exhibit they’re developing. Reluctantly they work together to solve a crime, and that of course brings them together on a number of different levels.

The central focus of The Jade Hunters is a pair of jade earrings. What makes these earrings so special?
The earrings are exceptional in three ways: they are beautifully created out of rare jade; they are very old and were owned by a Chinese emperor; and they contain great symbolic value for different political groups within China. Any one of those qualities makes them valuable, but all three make them priceless—“worth killing for,” as one character ominously puts it.

You’ve done extensive research for this book. Let’s talk about the Jade cocktail. Have you actually tried it and if so, what does it really taste like?
I learned a lot about jade for this book, and one of the interesting facts I came across was an ancient recipe for a “jade cocktail.” It consists of boiling powdered jade, rice and dew water in a copper pot, filtering the liquid, then drinking it. Supposedly, whoever drinks it will gain stronger, more supple muscles; harder bones; a calmer mind; “enriched” flesh (not sure what that means) and purified blood. Jade has always been important, one might say sacred, to the Chinese people, so it stands to reason they would incorporate it into their health regimen. I haven’t yet tried the jade cocktail, but I hope to someday because I sure could use improvements in all those areas!

“Now, if you’ll sit on the couch and hand me your robe, we can get started.”

Walker continued in that manner, directing her in a calm, dispassionate voice. She, on the other hand, was positively humming inside, titillated beyond belief that he was fully clothed and she was completely naked. What did he think of her? He had to be comparing her to the photos of her grandmother. Was she measuring up? She shivered involuntarily.

“Would you like me to turn up the heat?” he asked.

It can’t get much hotter than this, can it? Except if maybe you were naked, too. “No, I’m warm enough,” she managed… He captured several poses and then, as he’d done with the first stone, took the camera off its stand and took a series of hand-held shots from various angles. As he moved, he’d call out a running patter of gentle commands and comments like, “Look here,” “Turn quickly,” “That’s it” and “Give me sultry.”

Reggie thought back to the facial expressions her grandmother had used as a young model and tried to emulate them. A chuckle burst out instead.

“I was trying for ‘sultry’ like grandmama, but I can’t do it. I wouldn’t know how to do it.”

He paused with his camera by his side. “You really have no idea, do you?” His voice held a touch of wonder and he murmured, almost to himself, “No idea at all.” 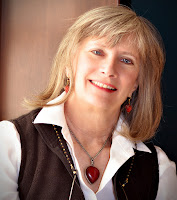 A native of California, A.B. Michaels holds masters’ degrees in history (UCLA) and broadcasting (San Francisco State University). After working for many years as a promotional writer and editor, she turned to writing fiction, which is the hardest thing she's ever done besides raise two boys. She lives with her husband and two spoiled dogs in in Boise, Idaho, where she is often distracted by kayaking, playing bocce, and trying to hit a golf ball more than fifty yards. Reading and travel figure into the mix, leading her to hope that sometime soon, someone invents a 25+ hour day. Her historical fiction series, “The Golden City,” explores America’s Gilded Age and its effect on characters, both actual and fictional, while her contemporary series, “Sinner’s Grove Suspense,” follows descendants of The Golden City as they navigate today’s equally treacherous waters. She is currently expanding both series.

You can follow The Jade Hunters Blog Tour here.