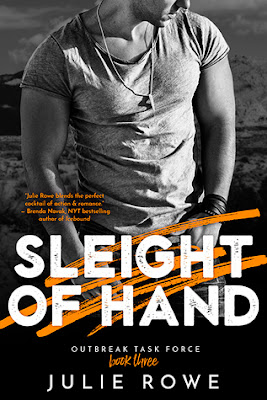 CDC nurse Joy Oshiro is stressed to the breaking point. College students are dying and no one knows why. And her new partner Dr. Gunner Anderson is frustratingly annoying--and sexy, but mainly just plain annoying--and proving difficult to avoid. He spent three years with Doctors Without Borders, and disillusioned is just the tip of his issues.

They’ll need to learn to trust one another if they have a chance at figuring out who is behind the attacks. She makes him laugh, makes him forget--for a little while. But each new clue keeps them one step behind the terrorists, with buildings and evidence being destroyed just as they near.

Now they’re in a race against time to not only find a cure but also to avoid becoming the next targets themselves.

Sleight of Hand is the third book in Julie Rowe’s Outbreak Task Force series. Although it is a continuation, it could be read as a standalone but I think you will enjoy it more having all of the information from the first two books, Viable Threat and Smoke & Mirrors. Each one of these books pairs someone who is former military with a CDC personnel. In the first two books, the guys were ex-military. In Sleight of Hand, the female is ex-military which I was glad to see.

Dr. Gunner Anderson works for the CDC Outbreak Task Force and is very difficult to work with. He has ran off two partners in the past six months. He quietly suffers from PTSD and depression due to several tragedies from his past. In an interesting twist of fate, Gunner’s new partner is the beautiful and tough Joy Ashiro who is a former military trauma nurse. Joy has some baggage of her own which makes them a perfect match even though they don’t realize it at the time. Their interactions are full of wit and sexual energy. Their relationship takes several twists and turns when they are tasked with trying to figure out who or what is making college kids deathly ill.

After reading the other two books, I was somewhat prepared for all of the action that transpired. I really felt like part of the investigation as multiple agencies worked together to understand the threat and put an end to it. I love that several people from the previous books made an appearance. That always makes everything seem more realistic and raises the stakes. The action is intense and I could really appreciate how emotional things became. The relationship between Gunner and Joy was realistic and complicated but also genuine. Gunner and Joy were both very blunt and that made some very heavy moments less intense. I look forward to reading the next book in the series which I hope will wrap up the last two relationships and provide us with the real ending.