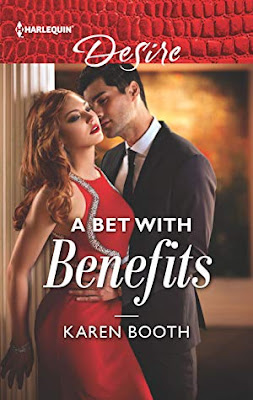 Can she stay away from her irresistible ex?

Mindy Eden’s on-again, off-again affair with Sam Blackwell left her with regrets. So when her sisters bet her she can’t attend a wedding as her gorgeous ex’s plus-one without falling for him again, Mindy stakes her future to prove she’s over Sam. Will a week of passion with Sam be the one gamble she’s ready to take?

Mr. Sam Blackwell. Welcome to Read Your Writes Book Reviews. How are you?
Very well, thanks. I’m not big on talking about myself, but Karen assured me that you’ll be gentle.

I promise to do my best. Will you please introduce yourself to readers?
My full name is Samuel John Blackwell. My birthday is February 14. You can draw whatever conclusion you like from that. My occupation? Essentially, I make money. I primarily invest in real estate and businesses.

Readers first got a glimpse of you in A Christmas Temptation. You were dark, mysterious, so sure of yourself. Tell me about the first time you met Mindy Eden?

I met Mindy at a restaurant in New York. Mindy and her family are pretty well known in the city, but I will admit (embarrassingly) that I didn’t realize it was her when I approached her at the bar that night. I saw the red hair and I was a goner. I don’t even make a habit of picking up women in bars, but I couldn’t resist.

What was it about Mindy that captured your attention?
As I said above, the red hair was a big part of it. Some women are redheads and some women are REDHEADS. Mindy is the latter. She’s just as fiery and fierce as you’d expect. But I have to say that the ease of our first conversation was what really drew me in. Sure, we flirted. A lot. That was a big part of the attraction. But I was also entranced by the way we were immediately comfortable with each other. We’re very similar. Driven and determined, but ultimately soft-hearted.

Over the course of A Christmas Temptation and A Cinderella Seduction, you have been cast in the villain role. Do you think your creator Karen Booth did a good job of capturing who you were, at the time?
If you go back and re-read those books, I think you’ll see that there was always part of the story that was hidden from view. I don’t advertise my intentions and I don’t feel the need to make excuses for myself. If I do something, I own it, but I’m not going to tell very many people what my motivations are. I’m ultimately a very private person. I admit that I did a fair number of manipulative things when it came to Mindy’s family, but those actions were only ever in an attempt to make Mindy happy. She’s a singular woman. I knew that flowers and romance were not going to be enough. She needs a man who will move heaven and earth for her. I was and still am willing to do that.

Here’s the thing, I could not wait to get my hands on your story. I knew there was something really special about you. Yes, even though you come across as being a harden jerk. I say that all out of love. What was your life like before you turned 14?
That time in my life seems so far away, it doesn’t always feel like those memories are my own, even though I know they are. I was a normal kid, a little nerdy, good at math, a big reader and generally a good student. I didn’t get in trouble, which I think might surprise some people. My family meant too much to me for me to ever fall out of line. I wanted to please them. I remember being very happy and feeling loved as a kid. That’s the part I will always hold close.

Your years from 14 to say 23/24 shaped you. How do you think those years made you into the man you are today?
They hardened me. There’s no way around it. When you lose everything that’s important to you, and your entire safety net, it changes you in a way that you can’t imagine until you’ve been through it. Eventually I became comfortable with knowing that I was on my own, but at first, it was incredibly difficult. I was mourning the loss of my old life, as well as my parents, and I was desperately worried about what the future held. I was like an alley cat, ducking into dark corners to hide. That instinct to keep yourself safe is strong. It makes you do things you’d never imagined yourself doing. And it took me years to unlearn some of that behavior. I don’t know that it will ever fully go away.

What’s the one thing about you that you wished people knew and/or understood about you?
That I can actually be a pretty fun guy! I like planning surprises for people I love, and I’m so looking forward to the chance for Mindy and I to have a family so I can play with our kids the way my parents played with me and my sister. Just because I wear a dark veneer for most of the world doesn’t mean that I don’t let at least a little bit of sunshine in.

Now that your story has been told and your secrets are out, how do you think Karen did with your story?
Karen had a balancing act before her. The entire Eden Empire series is focused on the female characters, but I kept making my presence known. It was a difficult thing to parse out, not letting me take too much time or story. Ultimately, Karen wanted it to be Mindy’s story, and I tried very hard to take a back seat when necessary.

I have an idea of what answer to my next question is. I just want to see if I know you as well as I think I do. What’s your favorite way to end a long day?
A glass of wine and a book. Quiet, for sure. The people I love around me, especially Mindy. If we fall into bed, all the better.

Sam, Mr. Blackwell, thank you so much for answering some questions for me. I loved learning more about you in A Bet with Benefits.

An eternity went by as Mindy paced in the reception area. Back and forth she went, but she wasn’t about to sit down. She had too much anxiety coursing through her veins. The thought of seeing Sam made her nervous, a reaction she needed to stomp into submission. She would get what she wanted today. She would not let him control her.

She’d nearly convinced herself of it until all six feet and six inches of deliciously imposing Sam Blackwell appeared before her.

“Mindy.” His voice was smooth and low, the sound filtering into her ears and quickly spreading through her entire body. It was like being gently shaken awake, something Sam had done to her countless times, rolling over in bed and pressing his long, lean form against hers. Sam was insatiable. He always wanted more of everything. Seeing him now made Mindy want to give him at least a little something. He was too appealing for words in black trousers and a charcoal-gray shirt, no tie, the sleeves rolled up to the elbows, showing off his firm forearms and his silver Rolex. His jet-black hair perfectly walked the line between tidy and messy. “I’d wondered when you’d turn up.”

Damn him. So he had planned this. He’d lured her here by buying the Mercer and she’d taken the bait. Maybe she should have let Matthew deal with this, but it was too late for that. She had to stay strong. Confident. She couldn’t let Sam rattle her. “I need fifteen minutes. In your office.”

“That sounds like a lot more fun than what I was just working on.” His eyebrows bounced, and the corners of his mouth threatened to curve into a smile.

Mindy cursed herself for thinking exactly what he was thinking. Fifteen minutes was plenty of time to do a lot of sexy things to each other. “If I do it right, it will only be fun for me.”

“I’ve had worse offers.” Sam waved Mindy closer, waiting until she started down the hall first. “Last door on the right.”

“I remember.” Mindy led the way, ignoring the intoxicating effect of having her lungs filled with Sam Blackwell scented air, hoping she could find the strength to outmaneuver him and get the Mercer building, all with her pride and heart intact.

Sam had a definite opinion about most things, but he was uncertain how to feel about Mindy Eden showing up at his office. Judging by the tug in the center of his chest the instant he saw her, he’d missed her. As he trailed behind her down the hall, the tension building in his hips confirmed that at the very least he’d missed her body—every killer curve. But he didn’t trust Mindy. Not anymore. By the third time you get kicked out of a woman’s life, she’s officially taken the gloves off.

“What can I do for you?” Sam asked, closing the door behind him.

Mindy dropped her handbag in one of the chairs opposite his desk. “I had hoped you and I were beyond guessing games.”

“If we are, it’s because I don’t play them. I honestly have no idea why you’re here.” He rounded his desk but waited to sit. “Please. Have a seat.”

Mindy shook her head, her russet-red hair a wavy tumble across the shoulders of her trim-fitting black jacket. Peeking out from beneath her lapel was something black and lacy. He loved that she worked in a fashion-forward business and could apply a sexy edge to her wardrobe. “I’m not staying. I’m here about the Mercer Building. You know, the historic warehouse out in New Jersey that I was about to buy? You snatched it out from under me. You’re trying to meddle in my business.”

“I might have bought it, but it had nothing to do with your business.”

Mindy’s pouty berry-pink mouth went slack with disbelief. “So what, then? Was this some attempt to get back together with me?”