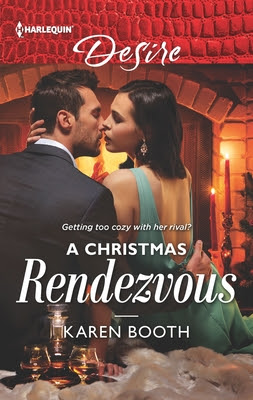 On her second run-in with her one-night stand,
they go from the bedroom to the war room!

It’s bad enough that high-powered attorney Isabel Blackwell is spending her Christmas on a high-stakes case. Then she discovers she’s up against the man who took her breath away one very special night. As a litigator, Jeremy Sharp shouldn’t be underestimated, but as lovers, Jeremy and Isabel can’t resist another rendezvous. Will this duel mean playing to win—or playing for keeps?

A Christmas Rendezvous is the fourth and final book in Karen Booth’s Eden Empire series. While you don't have to read all the previous books, I think reading A Bet with Benefits will help you to understand some events and the importance of this story.

Isabel Blackwell was first introduced in her brother’s story A Bet with Benefits. Initially, she wasn't a very big fan of the Eden sisters. But over time, she has come to love and respect them all. For the last several years, Isabel, a lawyer by trade, has been a DC fixer. She’s extremely good at her job. However, the rat race has been weighing on her. Seeing what her brother Sam has with Mindy Eden has made her realize she's been neglecting her heart and personal life for far too long. Isabel is ready for a fresh start. Her fresh start includes relocating to New York and opening an adoption law firm. But before she can get her new business venture up and running, she has to deal with a potentially catastrophic lawsuit against Eden’s department store. Technically, Eden's legal team should be handling this, but since the future of Eden's and the reputation of the Eden family are at stake, Sam convinces Isabel that she has to take on this one last case.

Forty-year-old Jeremy Sharp seems to have it all. He has a large house in Brooklyn. He's a partner at his family's law firm. He has a fantastic personality. He's also easy on the eyes. But for Jeremy, things are not as they seem. Jeremy is a very lonely man who works extremely long hours and is constantly looking for and hoping for his parents’ acceptance, approval, and praise. Jeremy is currently working on a case he himself would not have chosen. But at his father's insistence, Jeremy is representing Benjamin Summers in a multimillion-dollar lawsuit against Eden’s department store. In fact, this lawsuit will change Jeremy’s life forever.

Okay, so I can’t talk about A Christmas Rendezvous too much. I don't want to give anything away. What I can say is that I have a little crush on both Jeremy and Isabel. They are both great characters. When it's just the two of them together, you really see them shine. However, at the same time, when their case and the outside world intrudes on them, you see them bending but not breaking. It's during these times that you're able to see their strength and devotion to each other. Isabel and Jeremy share the same hopes and dreams. In the past, they have each been tested, failed, and left to pick up the pieces of their broken hearts and lives. Together, they prove to be a united front and make each other stronger.

There are so many wonderful moments in this story. I honestly thought Karen backed herself into a corner with trying to save Eden's from ruin and giving Isabel and Jeremy the HEA they so desperately deserved. She managed to pull off the impossible. And that's why she should be on everyone's reading list. Yes, she's one of my favorite authors, but she's got there by writing stories like this. A Christmas Rendezvous proved to be a really nice ending to a series where the women are the ones in power, who show they can truly have it all.

“I believe that a good nap will cure most problems.”

“I believe that love is ultimately the only thing that ever saves anyone.”

“I dare you to rock my world.”

“Most women aren’t seduced by the idea of negotiations. Ah, but I’m not most women.”

** You can read my interview with Sam Blackwell from A Bet with Benefits here. **