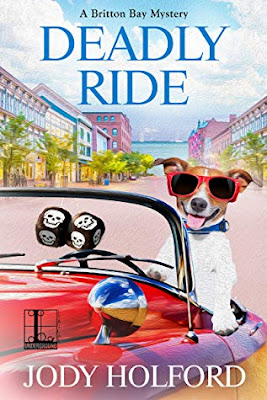 Newspaper editor Molly Owens loves her new life—and her new man—in the beautiful seaside town of Britton Bay, Oregon. But when a car-show killer strikes, she needs to put the brakes on the culprit...

As editor-in-chief of the Britton Bay Bulletin, Molly steps in for a sick reporter to cover the Classic Car Crawl, an exhibit of vintage automobiles. Her main challenge is not being driven to distraction by the presence of her hunky boyfriend, Sam Alderich, a fellow car enthusiast whose auto shop is sponsoring the event. But when she and Sam discover the co-founder dead in his car, Molly quickly shifts gears to solve the murder.

With a showroom full of suspects—including the co-founder's longtime partner, much-younger wife, enigmatic ex, and car owners with grudges and grievances—Molly soon starts to feel like she's spinning her wheels. And after things take a turn for the worse, it's all she can do to steer clear of trouble and stay out of a killer's clutches...

Deadly Ride is the third book in Jody Holford’s Britton Bay Mystery series. Jody does a really good job of writing the story so that new readers to this series can just jump right in. I have to admit that this is one of my favorite series because Jody combines cozy mystery and contemporary romance together perfectly. Unlike other cozy mystery authors, Jody doesn't try to hide or downplay the romance. She puts it front and center. But don't worry, the romance is sweet and closed door.

In Deadly Ride, Molly's boyfriend Sam is excited to host and sponsor the Classic Car Crawl. The event will bring tourists and revenue to Britton Bay, Oregon. It will also allow Sam the opportunity to share his love of classic cars with Molly and spend time with Jethro “Jet” Harkaw and Brian Stoley; his idols and the founders of the Classic Car Crawl. Off the bat, things start to go downhill fast. Jet turns out to be a womanizer and an all-around bad apple. Still, to everyone’s shock, Molly and Sam find his dead body.

While working as the editor for the Britton Bay Bulletin, Molly discovers several people who had a reason to want Jet dead. The question becomes who. Molly knows she should leave the murder investigation up to the police but is it really her fault when the murderer comes looking for her?

By far, Deadly Ride is my favorite book of the series so far. Jody had my heart sighing at the romance and pounding as Molly found herself in a life or death situation. The mystery was beyond good and it took until the big reveal for me to figure it out along with Molly. I’m really happy there are more books to come in this series and I look forward to reading them.

“When I love something, it’s forever.”

“I think you’re never too old to figure out what you want.”

“The most common motives for murder are love, money, and revenge.”

“I’ve never been in love. Until now. Until you.”