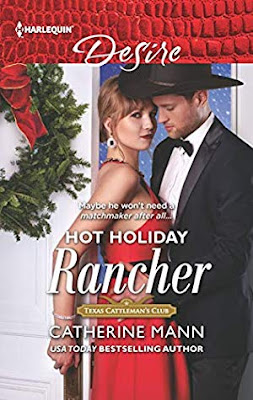 Being stranded for Christmas

never had so much sizzle!

Texas Cattleman’s Club member Jesse Stevens just hired a matchmaker to lure an appropriate wife to his remote ranch. But when a flash flood dumps Houston heiress Esme Perry on his doorstep instead, days before Christmas, is it a sign? Esme is smart, sexy…and a big-city girl to the core. Totally wrong for him. So why can’t they keep their hands off each other?

Catherine Mann has been on my reading wish list for a while now.  I finally got a chance to read her with Hot Holiday Rancher, the ninth and final book in the Texas Cattleman's Club: Houston continuity series. In case you are new to the series or the concept, the series is written by nine different authors who write about one couple for their book and a series couple whose road to a HEA is created and tested over the course of the series. There is also a mystery that spans the series.

In Hot Holiday Rancher, Jesse Stevens and Esme Perry are the main couple. The two meet on a cold and rainy night when Jesse rescues Esme during a flash flood. Jesse is the president of the Royal chapter of the Texas Cattleman's Club. Esme has traveled from Houston to Royal to pay a surprise visit to Jesse, with the hopes of convincing him to vote for her father, Sterling Perry, for president of the new Houston chapter. The surprise is on her. Jesse AKA Viking Cowboy as she calls him isn’t anything like she expected. For starters, Jesse is a true rancher. He does as much as, if not more work than the people he employees. He's also looking for a wife without the whole dating thing. Jesse has hired a matchmaker who has selected three candidates who are supposed to be a true match for him. Christmas is a time for miracles and Hot Holiday Rancher proves that two people who aren't looking for or believe in love will discover what a true miracle is.

The story of Jesse and Esme was good. Probably better than good. I just wanted a little more from their story. Catherine did a really good job of catching you up on the series. If you haven't read at least one other book in the series, I think you might be lost with the mystery, at least in the beginning. The first book I read in The Texas Cattleman’s Club: Houston series was book six, Off Limits Lovers, written by Reese Ryan. For me, it was easy to pick up on the mystery. In fact, I had a feeling as to who the villain of the series was. Having finished the series, I think I would have liked to have known the villain a little more. Over the course of the four books I’ve read, I’ve been given a glimpse as to what the person is like and their thought process, I just don’t feel like I truly knew them. I don’t know if reading the other books would have fulfilled my desire to have additional information or not. The love story of the series hero and heroine, Angela Perry and Ryder Currin is still being played out and tested, as with the previous books. As usual, this couple continues to face challenges and fight for their love.

Catherine has written really great characters. At times, Hot Holiday Rancher was humorous. The story was definitely passionate. I have to say I really liked the way the story ended. I was definitely surprised. Catherine has wrapped up this series nicely and I think fans of the series will be very happy.