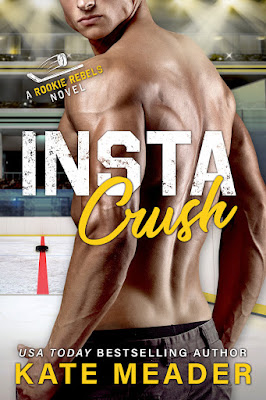 Theo Kershaw is the luckiest guy alive.Roaring back from a life-threatening injury, he has the world at his skates as defenseman for his new team, the Chicago Rebels. Everyone adores his big personality, his on-ice talent, and his killer smile. Everyone but his prickly neighbor—or so he thinks. It’ll take one chilly Christmas Eve to find out that maybe the girl next door isn’t such a hater after all …

Elle Butler is the most embarrassing person on the planet.

How else can the ex-military-now-bartender explain her crush on the hot jock who lives across the hall? True, he has gorgeous green eyes and perfect cheekbones, but the filter between his brain and too-sexy mouth is permanently malfunctioning. Yet she can’t stop checking out his Instagram antics or sneaking looks at him when he’s in her bar. So. Mortifying. Running from a past filled with damning secrets, Elle’s determined that this guilty pleasure remains buried in her deepest fantasies.

Because she couldn’t possibly indulge with the Theo Kershaw or make a mistake that draws attention to her under-the-radar life. And she especially couldn’t be a mom to a pro-athlete’s baby … could she?

In this standalone romance set in the Chicago Rebels world, a new generation of players take to the ice and learn that all’s fair in love and hockey.

I am seriously in love with Theo Kershaw. When he arrived on the pages of Good Guy, I knew he was special. I just didn't know how special.

With his grandmother's steadfast support and his determination, Theo was able to recover. But he's a different man from who he was two years ago. Now a defenseman for the Chicago Rebels hockey team, Theo seems to have the world in the palm of his hands. Theo loves to talk and flirt, God does he ever. He's a smart man, but people for whatever reason look at him and tend to think he has no brains. While that isn’t the case, Theo uses this to his advantage.

Elle Butler is something of a mystery. A few months ago, she showed up unannounced at the door of Levi Hunt. The two meet while Levi was in special forces and Elle worked as a support staff member. Levi and Elle are close, so when she says she needs someplace to lay low, Levi doesn't hesitate to let her stay with him, no questions asked. Levi even goes as far as to make it clear to his teammates that Elle is off-limits.

When Theo opened Levi's door and greeted Elle, it was lust at first sight. Theo made it his mission to flirt with Elle every chance he got. But he knows the rules. He can never cross the line with Elle. He just has so much fun with her snarky attitude towards him and their back and forth jabs at each other. What Theo doesn't know is that beneath all the snarky comments, Elle is harboring a secret crush on him. She even makes sure to watch his daily Instagram posts.

Theo likes to barge into Levi's apartment across the hallway, watch TV, and raid his refrigerator. On Christmas Eve, he decides to give Levi the unexpected present of restocking his fridge. Theo believes that both Levi and Elle are away for Christmas and he plans to make the delivery quick before he heads to Michigan to be with his grandmother. But to his surprise, Elle is still there and reveals that she doesn't really have any plans. Theo sensing Elle’s sadness makes her breakfast, which turns into lunch, which turns into dinner which turns into the two sharing one hot steamy passionate Christmas Eve together.

Six weeks later, the two discover that their day of passion resulted in a little hatchling. And this is where Kate Meader’s Instacrush gets real. I've already said that I loved Theo. What happens on the pages of Instacrush made me love him even more. Theo is kind, loving, caring, and surprisingly protective. He’s easy on the eyes, but he also has this inner depth which he hides from everyone. Elle, as I stated is a mystery. She has a past she's trying to make up for and a future she's trying to establish. She doesn't want anything from Theo and she definitely doesn't want anyone to know they're having a baby. The fact that Elle seems to be clouded in mystery really drives the story and makes the coupling of these two even more special.

The hero for the next book, Man Down, makes an appearance in Instacrush. I can’t wait to read more about him and meet the woman who captures his heart.

You can read an excerpt from Instacrush here.