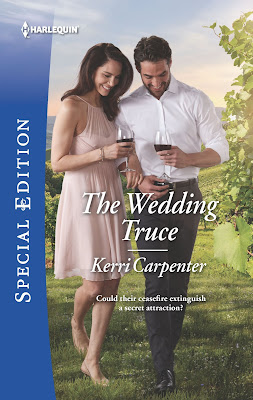 Could their ceasefire extinguish a secret attraction?

They need to get along…

For the sake of planning their best friends’ wedding shower, divorce attorney Xander Ryan and wedding coordinator Grace Harris are calling a truce. But Grace longs for her own happily-ever-after, and Xander doesn’t believe in them. So finding common ground might be a challenge. When an argument leads to a passionate kiss, neither plans to tell a soul. Because they’re all wrong for each other. Right?

I am so excited about the publication of my latest book, The Wedding Truce, Book 2 in the Something True series! This book was so much fun to write. It’s about a wedding planner and a divorce attorney whose two best friends just happen to be getting married. It’s an opposites attract and enemies-to-lovers story that…well, why I don’t just let my two main characters, Grace Harris and Xander Ryan, speak for themselves. Anyone up for a conversation between me and my characters? Here we go….

Kerri: Can you believe this is my tenth romance novel?
Grace: That is so amazing! Congratulations!!
Xander: Romance novels! (snorts) Please! Who reads that stuff anyway?
Grace: Are you kidding me? I love romance novels! (gets dreamy look) No matter the genre, romances have this ability to take us away from the world for a little while. And there’s always a happy ending. Just like real life.
Xander: Real life? You’ve gotta be kidding me. Happy endings don’t always happen in real life.
Grace: (turns away from Xander) I reserve the right to think that I am going to get my very own happy ending.
Xander: Yeah, just like my parents.
Grace: What was that?
Xander: Nothing. You’re delusional.
Kerri: Time out! We’re supposed to be having a nice, civil conversation for this blog.
Grace: I have to have a conversation with…him?
Xander: (frowns) What’s that supposed to mean?
Grace: (rolls eyes) Oh please. I think you know.
Kerri: Guys, we just started. Can you maybe try to be on your best behavior? People want to know about your story.
Grace: I don’t know what there is to tell. I mean, I barely know Xander.
Kerri: Well, let’s talk about how you guys met.
Grace: It all started when my best friend Emerson met this really cute bartender named Jack—
Xander: Who happened to catch Emerson when she fell out of a window wearing a wedding dress.
Kerri: I think the readers might want to know why Emerson was climbing out of a window while wearing a wedding dress.
Xander: It’s a long story.
Grace: There’s a book you can read about it. (winks)
Kerri: (playing innocent) You mean book 1 in the Something True series, The Dating Arrangement?
Xander: That was a shameless plug.
Kerri: (smiles) Anyway, now that your two best friends are getting married, I guess you guys are going to be spending a lot of time together.
Xander: (groans)
Grace: (sighs)
Xander: You know, most people really like me. I’m a fun guy.
Grace: Well, most people like me too. I’m a happy, positive person.
Xander: You’re not hard on the eyes either.
Grace: What?!?!
Xander: (runs hand over face) I mean, come on. You know you’re gorgeous.
Grace: I’m more than just a pretty face. I am a successful, smart, talented, business-owning…
Xander: Okay, okay, down girl. I was only trying to be nice. You should try the same. And I realize how smart and accomplished you are.
Grace: You do? (takes a step toward Xander)
Xander: (takes a step toward Grace) Sure.
Grace: Well, um, thank you.
Xander: You’re welcome.
Kerri: So anyway, like I was saying… (notices characters are no longer paying attention to her)
Grace: You know, you’re pretty handsome too. In a classic movie star kind of way.
Xander: You could be a model. (long silence)
Kerri: Hello!
Xander: (shakes head) I mean, you could definitely go into modeling, in case your little profession of wedding planning doesn’t work out.
Grace: (narrows eyes) Why wouldn’t my business work out?
Xander: Actually, I hope it does. The more couples you help get married, the more people who will come to see me for a divorce.
Grace: You are so cynical.
Xander: You are so unrealistic.
Grace: I can’t believe I have to deal with you during Em and Jack’s wedding. I don’t know how we’re going to get through it.
Xander: (shrugs) I guess we’ll just have to deal.

Kerri: Well, I’m not really sure what’s going on, but I think it’s clear that these two are definitely going to have to come up with some kind of truce to get through this wedding! Because if they don’t, who knows what’s going to happen. Then again, maybe something is bound to happen anyway….

Grace could feel herself getting worked up. She should have never come to this party with Derek tonight.

She heard him laughing loudly and saw a fresh drink in his hand. Great. Guess I’ll be Ubering back home.

Although, that was the least of her problems. She could have been at home, catching up on work or binging that new romcom series she had in her Netflix queue. Heck, she could have been watching glue dry and had more fun.

Well, she wasn’t helpless. She could walk out of here at any time.

Mind made up, Grace put her plate on the table, turned…and ran into a solid wall of muscle.

The deep baritone voice caused goose bumps to pop up all over her arms. Grace inhaled sharply—she knew exactly whom that delicious voice belonged to. She looked up to find the one person she actually despised.

The surprise quickly faded from his face and his eyebrows drew together. “Grace.”

What was with the universe tonight? Was there any other way this night could suck?

“What are you doing here?” she asked, suspicion in her voice.

She didn’t know what it was about Alexander Ryan, but the man brought out the absolute worst in her.

A frown marred what some people would call an incredibly handsome face. Xander was the best friend of Jack, Emerson’s fiancé. They’d met a few times now and each time only further solidified the fact that they had nothing in common.

Actually, there was one thing they shared. An intense dislike for each other.

Too bad. Because if he wasn’t so annoying, she might find him attractive. After all, he had classic movie-star looks that certainly turned heads everywhere he went. He was tall and fit, with broad shoulders, hair so thick and dark a woman—well, not her, but some woman!—might love to run her fingers through it and the most mesmerizing blue-green eyes that stood out even more because of the dark lashes that surrounded them.

She had no idea why, but the two of them had been at odds since the moment they’d met. Maybe it was because their professions were polar opposites. Xander was a divorce attorney. She helped couples start their lives together and he helped them end them. Maybe it was the fact that he’d made quick work of dismissing wedding planning the first time they met. Maybe it was his utter self-confidence, which she normally would find appealing in other men, but with Xander it just came out as arrogant.

Or maybe it was that the air became riddled with electricity whenever they were in the same room together. And she didn’t have the faintest idea what to do about that.

The Something True Series: 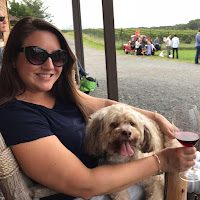 Kerri is offering up an e-copy of The Dating Arrangement, book one in the series.