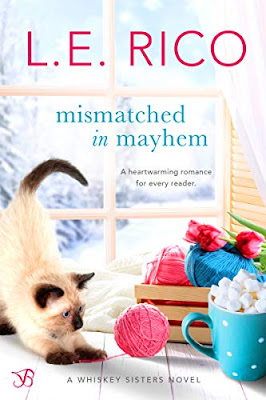 A heartwarming romance for every reader.

Welcome to Mayhem, Minnesota, with its sweater-wearing cats and ultra-competitive trivia nights. Where love really does conquer all...if you’ll let it.

Walker O’Halloran is finally ready to shed her “wild child” persona. Bartending at her family’s pub, babysitting her adorable niece and nephews, and getting her degree during the day. What she doesn’t do is date--or even think about dating. Ever. Until he walks into her bar, looking like a former Mr. Quarterback of the Football Team and Student Council President all rolled into one. No, thank you.

Mason Stevens has a secret—and it prevents him from knowing if someone is truly interested in him, or just what he can do for them. Until he meets Walker. She’s the first person in ages who doesn’t recognize him, and her grouchy attitude feels like the greatest challenge of his life. And he’s ready for it.

But the more time they spend together, the more he’s desperate to come clean—it’s just never the right time. Until the paparazzi do it for him…

“Are you familiar with the expression ‘looks can be deceiving’? Or, how about that old chestnut, ‘don’t judge a book by its cover’?" In my opinion, these sayings easily apply to Mismatch in Mayhem. The cover screams sweet and playful, but I didn't find the story to be just that. Last year I devoured the previous three books (Blame it on the Kiss, Mischief and Mayhem, and Mistletoe in Mayhem) by binge reading them. I couldn't get enough of the O’Halloran sisters or Mayhem, Minnesota. The stories were funny and most the time light-hearted. That's what I was expecting with this story. But it's not what I got. Mismatched in Mayhem is serious and deep, with only a few of the antics I’ve come to expect from the Whiskey Sisters series. This is a standalone read, however, if you are a fan of the series know that L.E. Rico pretty much left all the over-the-top outrageousness on the editing floor.

Johnnie Walker Black O’Halloran known as Walker is the third of the four O’Halloran sisters, also known as the Whiskey Sisters. Out of the four ladies, she's the one who spends the most time working at and running the family bar, O’Halloran's. She's also the one who was with their father when he unexpectedly died almost five years ago. At 24, Walker is a grumpy old maid. While she's been taking classes at the local community college for a couple of years, she still doesn’t have a major or knows what she wants to do.

Mason Stevens is in Mayhem to let off some steam with his college friends. Things are going great until he goes to the restroom and returns to find his friends have left him and that once again his phone battery has died. In an uncharacteristic move, Walker offers to drive Mason back to his dorm. Little does she know Mason isn't your typical grad student and her life is about to change more than she could ever have imagined.

Part of the beauty of Mismatched in Mayhem is uncovering just who Walker is. Without giving anything away, I can say that Walker feels more than she will ever admit and that she's smarter and braver than she gives herself credit for. When I started reading the story, I was a little upset that the series fast-forwarded 5 years and that Walker's forever wasn't who I wanted it to be. But Mason Stevens is just who Walker needed. He's a smart, funny, patient, caring guy who isn’t easily turned off by Walker’s grumpy prickly attitude. He truly has a heart of gold.

I would be remiss if I didn't mention Mason’s younger brother, Emmet. Emmet is a college student. He's also autistic. Emmet sees and says things no one would say. In his own way, he puts a person in their place or on the path they should be on. I found Emmet to be the person who truly brought Walker and Mason together.

Mismatched in Mayhem takes place in a small Minnesota town. The people there are at times eccentric and over-the-top. But there is no denying that they truly care about their own. The story is different from its predecessors, however, it is still touching and requires tissues to be nearby.

“She is nice, she just doesn’t know that she is.”

“Some things--some people--are worth the wait.”

“I know sometimes the only thing scarier than failure is the possibility of success.”

“I’ve got the strength of God holding me up every moment of every day.”

“I believe that there are angels around us every moment of every day. Some of them are the people we’ve loved and lost.”

“I’m afraid of the reporters and the cameras. But I wouldn’t stop being Mason’s brother.”