Review ~ FROM BOARDROOM TO BEDROOM by Jules Bennett 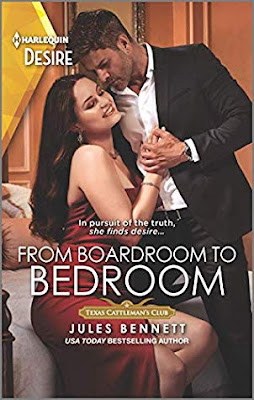 In pursuit of the truth,

Going undercover lands her under the covers…

When her reality-TV star stepmother threatens her rightful inheritance, designer Sophie Blackwood fights back. To get dirt on the gold digger, she poses as a consultant to media CEO Nigel Townshend. But Sophie can’t resist the dreamy Brit, and professionalism takes a turn toward passion. Suddenly everything is at stake if her secret is exposed—her family legacy and the man she desires…

From Boardroom to Bedroom by Jules Bennett is the third book of the Texas Cattleman's Club: Inheritance series. While the romance between Sophie Blackwood and Nigel Townshend stands apart from the rest of the series, I think reading the first book in the series, Tempting the Texan by Maureen Child should be read first. The first book sets up the series and semi-explains what's happening.

For some reason, when he died, Buck Blackwood left his entire billion-dollar fortune to his ex-wife Miranda Dupree and nothing to his children. Eldest son Kellan is spitting mad and is sure Miranda did something to his father in order for him to leave everything to her. Kellan is certain Miranda has secrets and that there is some dirt on her they can use in order to contest the will. From Boardroom to Bedroom finds Sophie, the youngest of Buck’s children, desperate to help her brothers find any dirt they can on their former stepmother.

With Miranda being one of the stars of the reality TV show Secret Lives of NYC Ex-Wives, Sophie leaves her beloved hometown of Royal, Texas behind and heads to the bright lights of New York City. She plans to infiltrate the offices of Green Room Media and find evidence that Miranda isn't as nice and caring as she's portrayed on the show. Sophie ends up landing the temporary job of being the administrative assistant to Nigel Townshend, the CEO of the company. Anytime she thought she would have to snoop is taken up by actually working. To Sophie's horror and delight, she finds herself attracted to Nigel and he to her. Things get more complicated when Nigel asks Sophie to accompany him to his sister's wedding in England and pretend to be his girlfriend. So much for planning.

I was excited to read From Boardroom to Bedroom. I wanted to know what Sophie would do in her misguided quest to make sure her brothers and herself rescued the Blackwood fortune from their "evil" ex-step monster. I loved Sophie because she was her own person. Being a size 16, she’s a plus-size woman who is comfortable in her own skin and knows her worth. Sophie is surprisingly bold and honest, yet she’s also sweet and smart. She’s a bright light, who isn’t comfortable with lying.

The press has labeled Nigel as the British Billionaire Bad Boy. However, there is so much more to him than what’s written in papers and online. He left his family in England and moved to New York to try and be his own person. Nigel created Secret Lives of NYC Ex-Wives. It’s his baby and means everything to him. When the show drops in ratings, he asks Sophie aka Rosyln Andrews, his temporary assistant, to help him figure out how to boost the ratings. The two spend hours working side by side and he’s very clear on how he feels about Sophie.

Mistaken identity storylines can be fun. In From Boardroom to Bedroom, Sophie went to New York with the sole purpose of keeping her identity hidden. For her plan to work, I understand why she couldn’t tell anyone who she was. My issue with the story was that at 62% in, Sophie was still lying about who she was. At this point in the story, she and Nigel had been intimate and she still didn't reveal herself. As their fake relationship and attraction grew, she still remained silent. This is where I started to lose love for the story but not Jules’s ability to keep me reading.

While I really liked Nigel and Sophie being together and watching them fall for each other, I wanted more from this story. I’m intrigued, if not in love with the secondary characters of Lulu Shepard, a reality star on the show, and Kace LeBlanc, Buck’s Texas attorney. The two have this love/hate back and forth thing going on. At this point, it seems as though their bedroom action is happening behind the scenes or off-page. I would love to know more about them and see what’s really happening with them.

As far as the overall series arc goes, I’m not sure what was learned that would help with the will mystery. You do see Miranda a little differently, as does Sophie. I’m definitely curious to read the next book, Secret Heir Seduction written by Reese Ryan. I would love to see if the Blackwood children regard Miranda in a better light now and what other secrets are revealed.

“Even the strongest people need to take a mental health break.”

“Family means everything at the end of the day.”

USA TODAY bestselling author Jules Bennett lives in the Midwest with her two girls and her high school sweetheart husband. She published her first book in 2005 and hasn’t stopped creating unique, fascinating characters since. She often takes her plots from songs or dreams.

Jules is the author of contemporary romance from small town to billionaires. While she is good friends with other romance authors, she still fan-girls at signings.