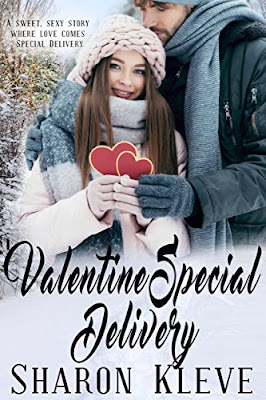 Vickie's husband took her dog, emptied their bank account and ran off with his secretary. The only thing he left her with is his car payment and a bad taste in her mouth.

After a well-placed kiss, Jake gets a taste of Vickie—and now he can't get enough. After delivering packages all day, he's more than willing to let her unwrap his package.

**This book was previously released and reviewed in January 2013.**

This was the first book I’ve read by Sharon Kleve. While I had some issues with the book, this will not be the last time I read her.

Vickie Valentine is a twenty-eight-year-old divorcee. Her husband left her after being with her for ten years, to be with his secretary. When he left, he took all their money and their dog, which Vickie really loved. Vickie is a jack of all trades at the bed and breakfast she works at.

One day, her best friend Kimmy (No. Unfortunately, not me.) takes her out for a day of pampering and they meet FedEx guy, Jake.

I liked all the characters even with what I perceived as being character flaws. Namely, you don’t tell some guy that you just met and like that your ex-husband is a jerk, right off the bat. Kimmy is hilarious. Every girl should probably have a friend like her. And Jake is sweet and loving.

There were some small grammar issues, but not enough to be a put-off. While this is a REALLY short story, I think Vickie and Jake hooked up WAY too fast. Or maybe, it was just the way things happened. Not to say that it wasn’t interesting.

Sharon Kleve was born and raised in Washington and currently lives on the Olympic Peninsula with her husband and two cats. When not writing, and working full-time, she can usually be found either curled up in her recliner with her cats and a good book or in the kitchen making cheese or baking sourdough bread or bagels.

Sharon is a multi-published author of contemporary romance with over twenty stories published in eBook, paperback, on audio and translated into six different foreign languages. She has written New Adult and Romantic Suspense, but what brings her the most joy is writing Romantic Comedies.

She loves giving her characters the happily ever after they deserve—with a few laughs and maybe a few bumps and bruises along the way.

When not writing, she can usually be found either curled up in her recliner with her cats and a good book, or in the kitchen baking sourdough bread or bagels. She has recently added cheese making to list of accomplishments.