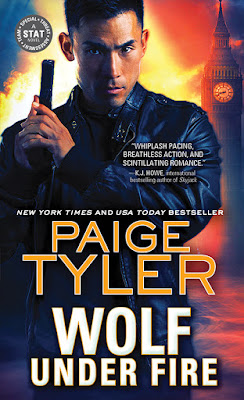 For the cases no one else can solve, they send in the Special Threat Assessment Team

Supernatural creatures are no longer keeping their existence secret from humans, causing panic around the globe. To investigate, monitor, and—when necessary—take down dangerous supernatural offenders, an international task force was established: The Special Threat Assessment Team.

STAT agent Jestina Ridley is in London with her team investigating a suspicious kidnapping. Over her radio, Jes hears her teammates being savagely attacked. She runs to help, but she’s too late. The only survivor, Jes calls for backup and gets former Navy SEAL and alpha werewolf Jake Huang and his new pack. Convinced that the creature who butchered her teammates was a werewolf, Jes doesn’t trust them. But if they’re going to uncover the facts and make it back home alive, she’ll need Jake’s help. And with everything on the line, Jes will have to accept Jake for who he is, or lose the partner she never expected to find…

Wolf Under Fire is the first book in Paige Tyler’s new Special Threat Assessment Team/STAT series. It’s a spin-off of her Special Wolf Alpha Team/SWAT series which I love a lot. The STAT team is an international task force created to address supernatural threats. The best thing is that the team itself is composed of supernatural beings that had never met until now.

Jestina “Jes” Ridley and her original team of humans are assaulted in London while investigating some kidnappings. This forces her to call in help from alpha werewolf Jake Huang who is a former Navy SEAL and the newest member of the team. The team also includes two other werewolves and a supernatural who has the ability to mentally connect with technology. Jes isn’t exactly thrilled to work with werewolves and unfortunately, it shows. Oddly enough, her attraction to Jake makes it difficult to hold onto her disdain for werewolves. Plus, this is what she signed up for. Jake has his own issues as he struggles to adjust to his new role on the team and being away from his newly “adopted” twin daughters who are also werewolves.

Wolf Under Fire was very exciting from beginning to end. There were a lot of moving parts regarding the investigation which introduced a new supernatural that you will have to read to believe. Paige Tyler never disappoints as she continues to play off traditional supernatural creatures to create her own versions. The STAT team had a lot of depth and I wanted to get to know all of them. They came together as a team when it counted and really became a family. Jake and Jes had good chemistry plus there is another couple that’s also introduced. I can’t give away a lot about the book itself because I think it would ruin the excitement. Once you start to read, it all comes together like a good action/adventure movie ala Mission Impossible. I can’t wait to read the next book. I can only imagine what new supernatural creature gets introduced next.