Review ~ BURIED IN THE STACKS by Allison Brook 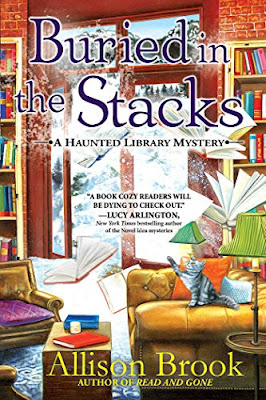 Librarian Carrie Singleton is building a haven, but one of her neighbors is misbehavin'. Can resident spirit Evelyn help Carrie catch the culprit who made her a ghost?

In winter, the Haunted Library is a refuge for homeless townspeople. When a group purchases a vacant house to establish a daytime haven for the homeless, Carrie offers the library as a meeting place for the Haven House committee, but quickly learns that it may be used for illegal activities.

As the new Sunshine Delegate, Carrie heads to the hospital to visit her cantankerous colleague, Dorothy, who had fallen outside the local supermarket. She tells Carrie that her husband tried to kill her—and that he murdered her Aunt Evelyn, the library's resident ghost, six years earlier.

And then Dorothy is murdered—run off the road as soon as she returns to work. Evelyn implores Carrie to find her niece's killer, but that's no easy task: Dorothy had made a hobby of blackmailing her neighbors and colleagues. Carrie, Evelyn, and Smoky Joe the cat are on the case, but are the library cards stacked against them?

Buried in the Stacks is the third book in the Haunted Library Mystery series by Allison Brook. Allison does a good job of mentioning past events that allow this to be a standalone read for new readers of the series.

Buried in the Stacks deals with two seemingly separate issues. Homeless people are invading the Clover Ridge Public Library during daytime hours, in order to keep warm. While many are respectful and keep to themselves, there are some who relish in causing problems. And, the library's reference librarian Dorothy Hawkins is killed after a series of misfortunate events.

When Dorothy’s aunt Evelyn, the resident library ghost asks Carrie Singleton, Head of Programs and Events for the library, to find out who killed Dorothy, Carrie can’t refuse. Dorothy was disliked by almost everyone who knew her because of her not so secret hobby of digging up dirt and blackmailing people. For Carrie, this makes her suspect list very long. Slowly but surely, Carrie is able to piece together what happened to Dorothy and why.

I enjoyed this installment of the series. I just wished the story moved a little faster. My review is based on an ARC of the story. I don’t know if this was the final copy of the book or not. I found there to be redundancy in talking about and/or discussing several items over the course of the story. Overall, Buried in the Stacks, was a good mystery. I was surprised to discover who the killer was and what they were actually capable of. I’m disappointed in the romance of the book. Carrie and her boyfriend Dylan Avery’s relationship seemed to be getting stronger and indicating that things were going well for them. I’m not totally sure if that’s really the case, at least on the pages.

I’m excited that there is another book in this series. I’m looking forward to seeing how Carrie, Dylan, and Evelyn progress in their relationships after the events of Buried in the Stacks.

Check Out for Murder releases September 8, 2020