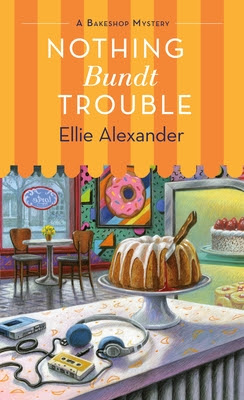 This time, Torte's pastry chef and amateur sleuth finds herself coming out of the oven and straight into the fire in Ellie Alexander's Nothing Bundt Trouble: A Bakeshop Mystery.

Spring has sprung in Ashland, Oregon, and everything at Torte seems to be coming up buttercream roses. But just when Juliet Capshaw seems to have found her sweet spot--with her staff set to handle the influx of tourists for this year's Shakespeare festival while she moves back into her childhood home--things take a dramatic turn. Jules discovers a long-forgotten dossier in her deceased father's belongings that details one of the most controversial cases in Ashland's history: a hit-and-run accident from the 1980s. Or was it?

Now it's up to Jules to parse through a whole new world of details from another era, from unraveling cassette tapes to recipes for Bundt cakes, before an old enemy brings the Capshaw "pastry case" to a modern-day dead end.

Ellie Alexander’s Bakeshop Mystery series is one of my favorite cozy mystery series. I literally wish Torte and the characters were real.

Nothing Bundt Trouble is the eleventh book in the series. I would like to say it’s a standalone read, but I don’t believe it is. At its heart, the story is a much-needed journey for the series protagonist, Jules Capshaw. The story goes back in time to 1988. Readers are introduced to Will, Jules’s father and are able to see the town of Ashland, Oregon, and Torte in their infancy.

Now that Jules’s mother, Helen, has married Ashland’s Police Detective Doug Curtis aka The Professor, Jules moves back into her childhood home. While looking in the basement, Jules discovers a diary written by her father. The diary details events starting on March 14, 1988, where Will and Doug witness a hit and run accident, resulting in the death of a stage actor. At the time, The Professor was fairly new to the department and this became his first solo investigation. Wanting to make a good impression, he asked Will to help with his investigation. The two dub the case “The Pastry Case” and attempt to find out what happened. Unfortunately, this was the first case The Professor wasn’t able to solve. While Doug and Jules sit down together to go over the diary, it gives them an opportunity to bond and reminisce about Will. In the end, Jules knows that she has to attempt to solve the case for both her father and The Professor.

Nothing Bundt Trouble is my most favorite book of the series so far. I knew Ellie was going to write a book set in the 80’s and I knew the book was going to feature Jules’s father who hasn’t been introduced until now. I couldn’t imagine how she was going to pull this off. But she did and did an amazing job in the process. The story allows you to get to know Will and see him and Helen open up Torte. You also get to witness Will’s love for Helen and Jules, which comes through the pages of the story. Jules has so many of her father’s qualities that I don’t think she ever picked up on until now. Nothing Bundt Trouble was definitely a book this series and Jules herself needed. I can’t wait to read the next book, Chilled to the Cone.

“Your instincts will never lead you astray. That’s a lesson for work, for love, for life.”