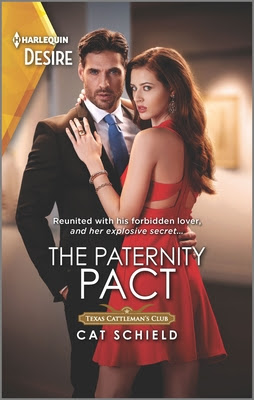 Reunited with his forbidden lover,
and her explosive secret…

His unforgettable one-night stand is back in town.

And she’s not alone…

Five years ago, Grant Everett and Harley Wingate waltzed out of the Texas Cattleman’s Club ball and into Grant’s bed. Now an international philanthropist, the beautiful young woman has returned to Royal—with their secret son in tow. Grant wants answers—and Harley in his bed. But with scandal swirling around her family, can he stop Harley from running all over again?

I’m loving the Texas Cattleman’s Club: Rags to Riches series. The Paternity Pact by Cat Schield is the third book in the series and is surprisingly a standalone read. Cat has done a good job of catching readers up on core events to the overall series arc that have taken place in the previous two books, The Price of Passion by Maureen Child and Black Sheep Heir by Yvonne Lindsay. At its core, The Paternity Pact is a second chance romance that brings a family together.

Grant Everett is a 35-year-old well-respected fertility specialist in Royal, Texas. His dedication and drive to help couples create families is his life’s work. Grant is an all work and no play type of guy. He’s learned the hard way that marriage and family aren’t in the cards for him. Grant is a logical, not an emotional thinker. The one and only time he allowed himself to give in to his emotions was five years ago at the Texas Cattleman’s Club ball. There he met and became enticed by Harley Wingate. The two spent a passion-filled weekend together until he discovered her age.

Harley is the youngest of the five Wingate children. At the age of nineteen, she discovered she was pregnant and refused to reveal the identity of the father. With no true support from her wealthy family, Harley escaped to Thailand to have her child and grow as a person. While there, she founded Zest, a nonprofit that helps lift women out of poverty, in various overseas countries. Though successful, Harley hasn’t thought of Zest on a much grander scale. Instead of fundraising internationally to fund the nonprofit, she relies solely on the contributions given to her by Wingate Enterprises. Now that Wingate Enterprises is having financial and public relations problems, she must return to Royal and look for new donors. Harley’s four-year-old son Daniel has been asking about his father and being imaginative as to why he isn’t with him. Harley now realizes it’s time to bring the two together. But with Grant rejecting her in the past, she can’t be sure he won’t reject her and her son now.

I love the story Cat has written. Grant, Harley, and Daniel are all really great characters. The five years since Harley and Grant have been apart haven’t dulled the intense attraction they have for each other. However, their age difference is still a huge problem between them. “I never expected I would be a father. But I intend to be a good one.” And that he is. Grant has no experience with children but he falls into an easy relationship with Daniel. Harley doesn’t want to share custody of Daniel if Grant isn’t willing to have a serious committed relationship with her. These two are going to have to let go of their past hurts and preconceived notions in order to put their son first. But with neither of them wanting to budge, will they truly be able to do so?

Cat Schield’s The Paternity Pact was everything I wanted and then some. I’m hoping there’s more of this couple in future books.

“My family never made an effort to understand me. You see what motivates me and appreciate why I am the way I am.”

“Family can be hard sometimes. Mostly they bring out our best, sometimes they can’t help but be compelled to turn us into the worst of ourselves.”

**Received a copy of the book from the author and voluntarily reviewed it.**

One Night in Texas by Charlene Sands releases January 1, 2021